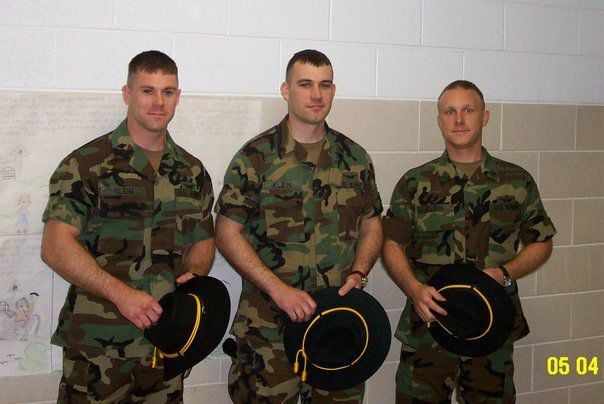 The Klein brothers – Sheldon, Shane, and Travis – during their mutual 2008-09 deployment to Iraq. 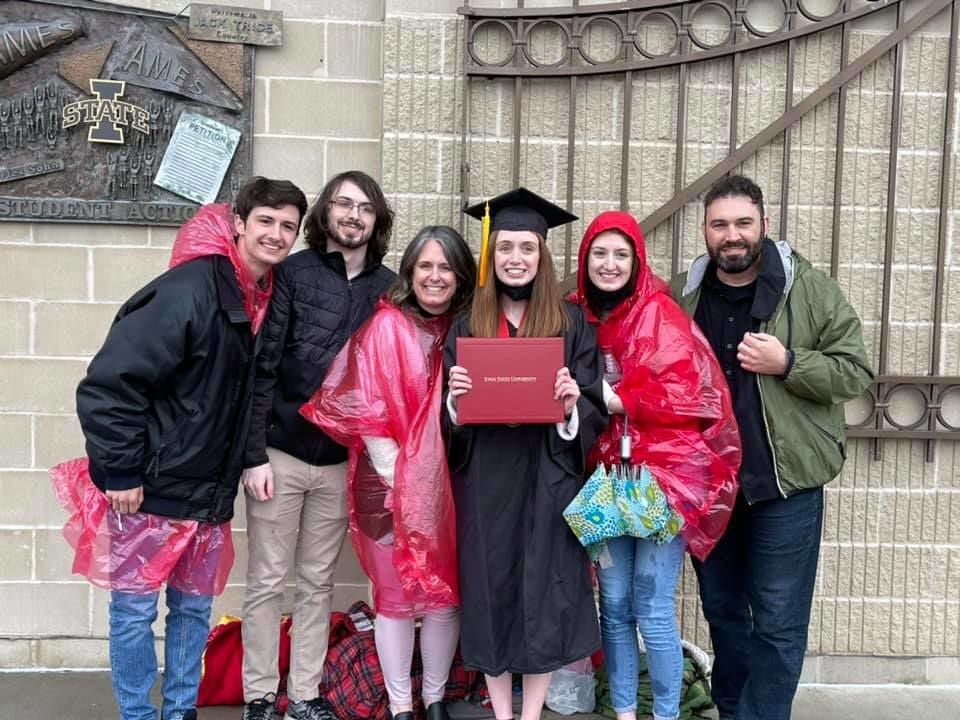 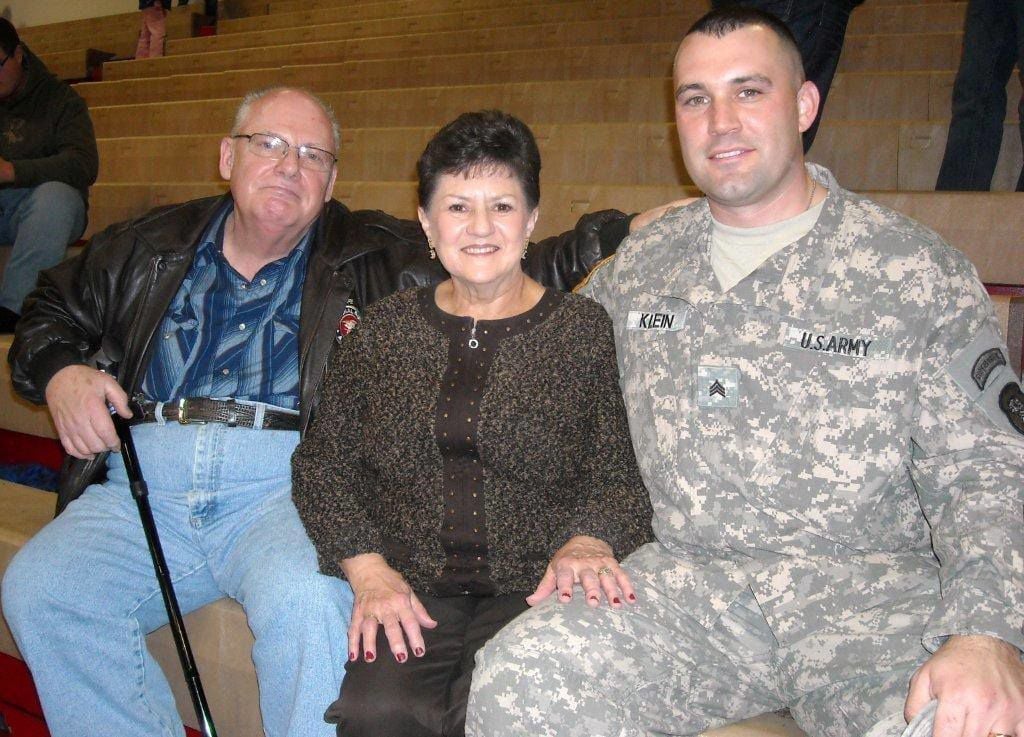 Shane with his parents, Mike and Cassie Klein (circa 2008).

The Klein brothers – Sheldon, Shane, and Travis – during their mutual 2008-09 deployment to Iraq.

Shane with his parents, Mike and Cassie Klein (circa 2008).

LA PORTE CITY – On a sunny Saturday morning in August, I joined M. Shane Klein at the dining table in his home, each of us with a cup of hot coffee in hand, to talk about his military service (1997-2020) and experiences, and to share them with our readers. This was an easy interview to arrange, because Shane and I are family. I’ve known him for more than 30 years.

Over the years, we have talked at gatherings – Christmas, Easter, Thanksgiving, weddings, funerals, graduations, birthdays, and so on – about the everyday things. Family life, the weather, the news, our jobs. However, I really learned about who he is during the 90 minutes or so I spent in his home.

When Shane retired from Army National Guard of Iowa in 2020, his last post was Iowa National Guard headquarters in Des Moines. A non-commissioned officer (NCO), he held the rank of E6 staff sergeant, with 10 or so men who reported to him. He was responsible for their welfare. Above Shane in the chain of command was the platoon sergeant.

A helicopter mechanic, Shane also had the role of “managing and translating information.” Along with a colleague, he “created state-level tools to produce actionable data.”

Shane’s parents, Cassie and the late Mike Klein, grew up in the Geneseo/Dysart area. Shane, 48, grew up in Dysart, and graduated from Union High School in La Porte City in 1991. Like his older brother Travis, he was born in Pascagoula, Mississippi, where his father was stationed with the Navy. When he was about two weeks old, Shane – along with Cassie and Travis – returned to Dysart. His dad followed them a few months later when his enlistment ended.

Mike, who passed away in 2019, served active duty on a submarine during Vietnam, then was a member of the Navy Reserves. After leaving reserve service, Mike was “totally out” for a while. Then he joined the Army National Guard of Iowa, working on helicopters.

Mike’s dad was in the military, and Cassie’s dad was a civilian employee at a base.

With that kind of tradition in his family tree, Shane said, “I always thought I would probably serve.”

Shane’s two brothers have served our nation, too. Travis, two years older than Shane, enlisted in the Army National Guard in high school. Sheldon, the youngest Klein brother, enlisted after high school and was commissioned as an officer at the University of Northern Iowa. The brothers have been deployed – separately and together – to places like Kosovo (in the Balkans) and Iraq. Like Shane, Travis is retired from the military. Sheldon remains in service.

Shane had completed a couple of years of college before signing up. He started his academic career at Simpson College in 1991 (and eventually finished his degree in music from UNI in 2012). For a time, he pursued his love for music, working as a professional musician.

“I always wanted to be a family man,” he said, but being a working musician wasn’t particularly conducive to that kind of life.

He also drove a truck, and worked for employers like IBP in Waterloo and the Duane Arnold Energy Center in Palo.

In 2003, he took a job that aligned more with his military service. For 17 years (2003-20), he was a production controller in “the hangar,” the Army Aviation Support Facility (AASF) in Waterloo, and was tasked with scheduling, analyzing, and reporting maintenance activities of the unit. He was one of three such personnel in Iowa – the other two are located in Davenport and Boone.

He saw signing up for the National Guard as a trade-learning opportunity that he could apply to a career outside the military, and support his family. After he enlisted in 1997, he attended nine months of instruction, first basic training in South Carolina, and then “in the old schoolhouses in Virginia,” learning helicopter maintenance, specifically attack helicopter weapons systems.

“Iowa guys, Midwest guys, always score highly at these schools,” Shane noted. He added that a lot of the time there was “focused on military doctrine,” and the best “schoolhouse” ended up being your unit back home.

Shane said that at this time, the National Guard “changed its mind, going from wanting experts to efficiency. ‘This is how to do this.’ No independent thinkers.”

Another change he experienced during his time in the military was going from being a self-contained (all Iowa) unit to a mixed one with people from states like West Virginia, Minnesota, and others.

Before the terrorist attacks on American soil, Shane thought he might be deployed to Bosnia as a mechanic for the old Cobra gunships. However, the Cobras were decommissioned “due to a transmission defect,” and his unit wasn’t deployable. Eventually, they became a Black Hawk helicopter medevac unit, and deployed in 2008.

He remembers that “after 9/11, the training became aggressive.”

The Klein brothers’ unit was sent to Iraq in 2008-09. Shane, a helicopter mechanic in the maintenance company, was sent overseas ahead of Travis and Sheldon, who served in the flight company (that his maintenance company supported). Prior to going to Iraq, they were based at Fort Sill, Oklahoma.

As a mechanic, he didn’t move around as much in-country as his brothers did. While he called places like Balad Air Base home, his brothers – Travis, a crew chief, and Sheldon, a helicopter pilot – flew medevac missions. At the unit level, they didn’t travel together in the same helicopter.

Despite the relative “safety” of being stationed at a large air base, Shane was medevaced to Germany for a ruptured disc in his neck. Thanks to God, physical therapy, and duty that wouldn’t exacerbate the condition, he was able to finish his deployment and stayed in 12 more years.

Staying in was a good thing, because it helped bring him to where he is today – his calling as a pastor.

During his deployments to Iraq and Kosovo, Shane found that the chaplains, and chaplain assistants, sought volunteers to help with chapel services and Bible studies, serve as drivers, and other duties.

“It was one of the best ministry experiences I ever had,” he said.

Today, Shane is working to complete his seminary degree, and he has just one more class left at Midwest Baptist Theological Seminary in Kansas City, Missouri. However, his career in the ministry has already begun. He has been serving as the full-time pastor at First Baptist Church in Vinton since January of this year. Last summer, he began his relationship with the church by “filling the pulpit” after their previous pastor moved on, and then as their part-time pastor.

“It’s been a congregation since 1856. It’s the oldest, or second oldest, church in town,” Klein said.

Shane married his high school sweetheart Sara (the daughter of Jeff and Sheri Lesh of La Porte City), in 1994. Sara is in her third year as an instructional math coach for Kittrell Elementary and Lincoln Elementary in the Waterloo School District. They have four children – two boys and two girls. Gabriel (Gabe), age 24, is a software engineer in Omaha, Nebraska. Elizabeth (Lizzie), 22, is a recent graduate of Iowa State University with a degree in public relations. Cora, 17, is a senior at Union High School in La Porte City. Samuel (Sam), 16, is a junior at Union.

The personal bonds established over 23 years of military service remain for Shane.

He said he has maintained friendships with buddies from the Army – including “guys who are still in and some who are brothers in Christ. When we see each other after a long time, it’s like no time has passed at all.”

Some clouds this evening will give way to mainly clear skies overnight. Low 47F. Winds NNW at 5 to 10 mph.