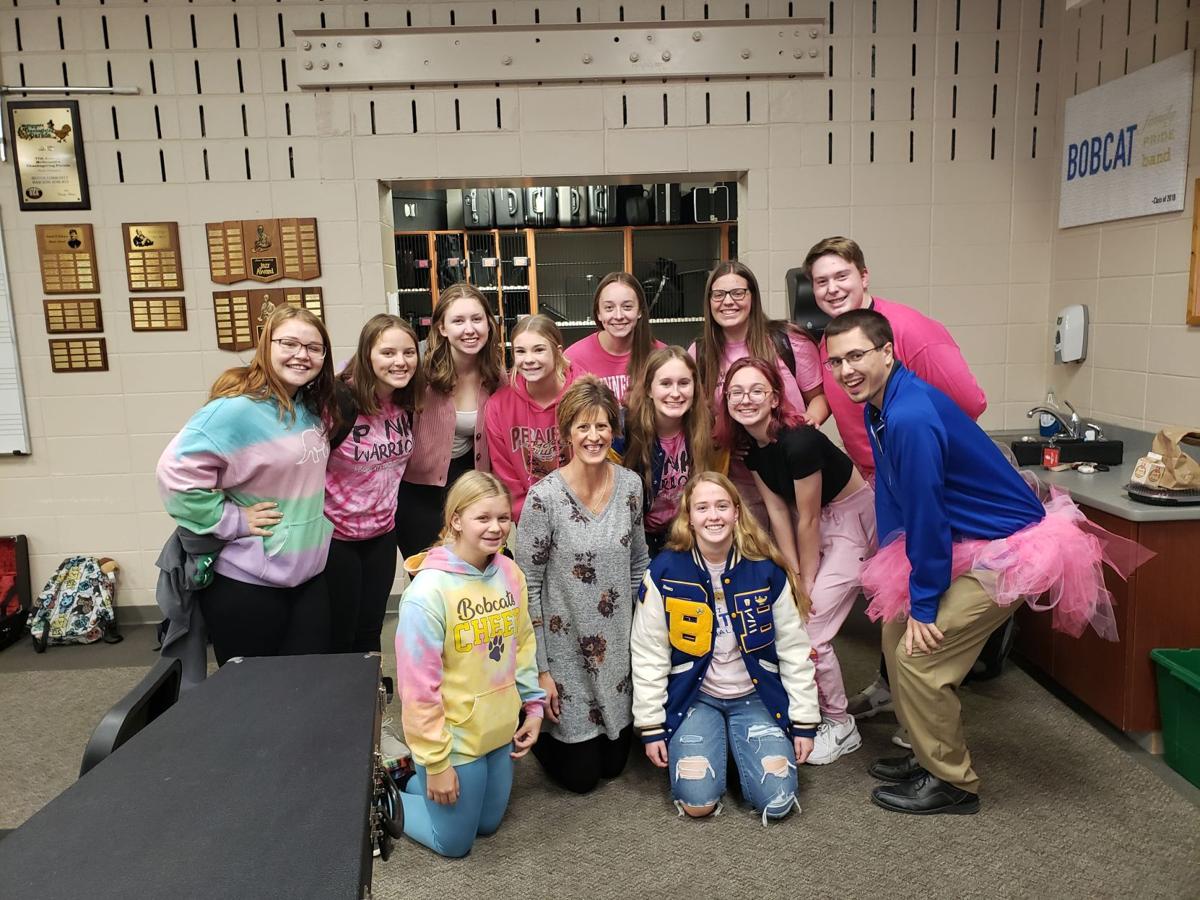 Michelle Lampkin (center, kneeling) was surprised by the high school band all wearing pink the day before her surgery on November 10. Lampkin said “It was a surprise and I started crying because it meant the world to me.” The students are Makenna Ireland, Jada Garrett, Rebecca Payne, Courtney Chambers, Reagan Gorkow, Sarah Wright, Natalie Rickels, Caitlin Atwood, Sammy Dengler, Emery Rinderknecht, Jared Lancaster (high school band director) and Jackson Kleinmeyer. 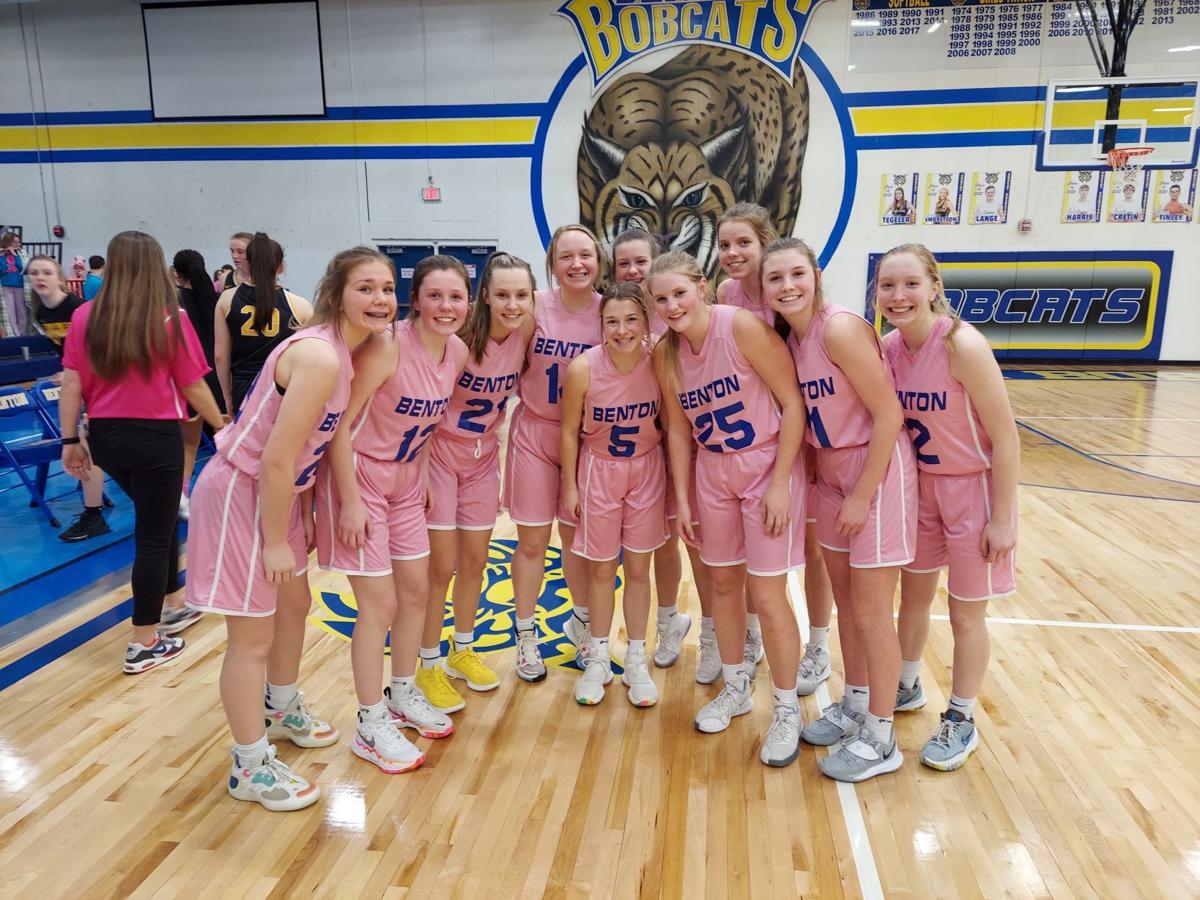 Michelle Lampkin (center, kneeling) was surprised by the high school band all wearing pink the day before her surgery on November 10. Lampkin said “It was a surprise and I started crying because it meant the world to me.” The students are Makenna Ireland, Jada Garrett, Rebecca Payne, Courtney Chambers, Reagan Gorkow, Sarah Wright, Natalie Rickels, Caitlin Atwood, Sammy Dengler, Emery Rinderknecht, Jared Lancaster (high school band director) and Jackson Kleinmeyer.

Everything happened so fast for Michelle Lampkin. Benton Community’s junior high band director was diagnosed with breast cancer on October 1, then had an MRI a week later and met with surgical oncologists on the 11th. She was scheduled for surgery in November.

“It all happened really quickly,” Lampkin said. “I continued to work when I could after Thanksgiving break. I missed days for appointments and treatments, but I want to be here as much as I can.”

When the Benton girls basketball team scheduled a Coaches vs Cancer game against Waverly-Shell Rock on Monday, Jan. 10, the girls wished to support Lampkin with the proceeds from the night. Not only did the girls defeat the Go-Hawks, but the crowd got to enjoy a dance team performance, pep band and cheerleaders through both games.

“It’s a great thing to be able to do for Michelle Lampkin,” girls basketball coach Jeff Zittergruen said. “We saw a packed house here to support her and the girls. It was neat of them to choose her.”

Approximately $700 was donated to Lampkin to help with expenses for treatment and recovery. She was able to attend the game and watch the pep band perform. Many students chose to wear pink in support of Lampkin.

“I got emotional that they chose me because there’s I mean there’s lots of people out there going through the same thing,” Lampkin said. “Coach Z and Coach Carlson told me the students had chosen me. I was their teacher in elementary school. Many aren’t involved in fine arts anymore, yet they still showed me this support. It means a lot to me.”

Lampkin has taught at Benton Community for nearly 25 years in both the elementary and middle school levels. She has also instructed at the high school level, including the marching band.

“I graduated from a school district about this size, so it felt right to me from the start,” Lampkin said. “There’s a family feeling here. The teachers have watched over my boys through this whole ordeal. I know they’re in good hands and I don’t want to leave that kind of atmosphere.”

“Michelle Lampkin and her family are just a special group in our community,” boys basketball coach Larry Carlson said. “The fact we had great support tonight from the community and Waverly tonight shows how well respected she is. We can turn on the news and we can see bad things that happen out there in the world, but it’s really nice to witness when people can come together.”

From support in the high school band to prayers from the community members, Lampkins said she is grateful for the support and does not feel alone whatsoever.

“This is pushing me to fight every day,” Lampkin said. “So many are stepping up to help. It takes away a tremendous amount of stress after radiation treatment.”

A mix of clouds and sun early, then becoming cloudy later in the day. High 24F. Winds NW at 5 to 10 mph.