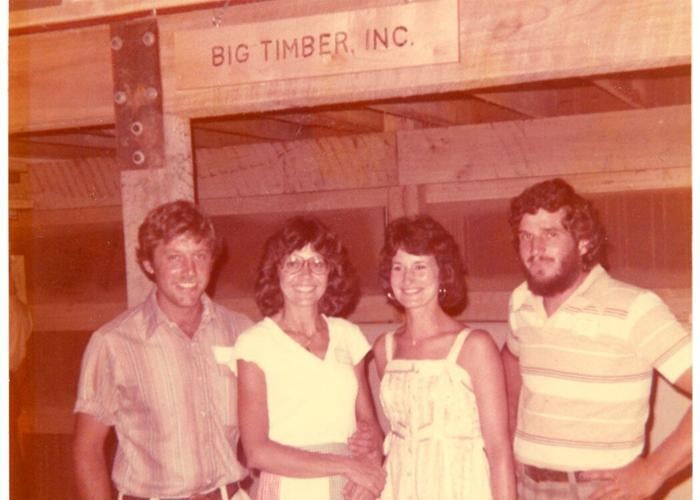 Submitted photos The founders of Big Timer, circa 1978: Ted and Jeannie Mann and Jacquie and Jim Hodgson. 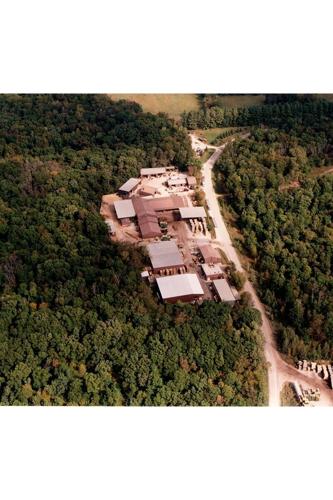 This is the Big Timber complex from the 1990s.

Submitted photos The founders of Big Timer, circa 1978: Ted and Jeannie Mann and Jacquie and Jim Hodgson.

This is the Big Timber complex from the 1990s.

In 1977, two area couples, Jim and Jacquie Hodgson and Ted and Jeannie Mann took a big business chance and it paid off with the Big Timber lumber and logging business. The partners sold the business in 2005, but it lives on. Recently, our summer intern Sophia Dilley — and the Hodgson’s granddaughter — — sat down with the former owners to reflect back on the years.

Did you know that a local business once sold its sustainable products to countries like France, China, South Korea, and Japan?

“Both Jim and I were 32 years old in 1977 and we had both worked at Hawk-Bilt.” Ted Mann had worked there for ten years and James Hodgson for six years. “We decided if we were ever going to do something on our own, we would do it now,” said Mann. Ted and Jim were thinking of Dick Thompson and his lumber business. Neither of us knew anything about the lumber business. We were farm machinery people previous to the sawmill.

“We bought a load of lumber, Red Oak, and Cherry, from Vince Becker. Then we went to Big Timber, Montana and sold it there,” said Mann.

“We called one of the local cabinet shops and made such a profit from the lumber that we decided we wanted to give it a try,” said Mann.

“When we first started there were only four employees: Jim, Jacquie, Ted, and Jeanne. We were incorporated in October of 1977. We got the first sawmill from Independence, Iowa which had been built in 1936. “We reincarnated that mill so it would work,” said Hodgson. They sold their first load of lumber to a company, Toughy, in Chatfield, MN.

“Bob Fowler was our first employee and Mark Mann was our second employee,” said Hodgson.

Prior to the first kiln, they sold green lumber. “Most was Red Oak. We could see the price for dried limber was a lot higher. We had to build a kiln to dry the lumber,” said Hodgson.

“I woke up one night in time to prevent it from spreading to the rest of the sawmill,” said Hodgson.

“The Vinton, Shellsburg, and Urbana fire departments ran their tanker trucks to the river and back to the sawmill,” said Mann.

The process of drying lumber is a lengthy one and can take up to 32 days! According to Mann, “You have to dry the lumber in the kiln to 6-8% of moisture. If you had 50,000 board feet of lumber, you would extract 90,000 pounds of water from the lumber.”

“When the lumber comes off the side of the log, Jacquie would grade it based on the quality of the wood. The wood with the least amount of knots was the most valuable.

“We were one of the first lumber sawmills to use bandsaws to cut our hardwood lumber,” said Hodgson.

According to Mann, Jim and I thought we could cut hardwood with a band saw. “When we first started using a big circle mill, it took 5/16ths kerf out of each cut, and when we converted, it only took a 1/8 inch out, so we ended up with more lumber.

“Later on, one of the big advantages when we dried the lumber, was that we burned the sawdust to supply the heat for the kilns. It was the cheapest way to dry lumber; other sawmills were using electricity and gas to dry and power their kilns,” said Hodgson.

Another interesting thing about Big Timber is that they manufactured barrel staves and heading for the wine industry. “We just cut the White Oak to a certain length and then sold them to cooperages, and then they would make the barrels. Rift and quartered, we sold the barrel staves to Gilbert & Moreau in Bordeaux, France. The company was 400 years old at the time and would buy a year’s supply of barrel staves and heading. It allowed Jim to buy good logs,” said Mann. “White oak was the lumber used, and Oak barrels couldn’t be made from Red Oak because the rings were too big,” said Hodgson. The White Oak tannic acid doesn’t affect the taste of the wine like red oak.

The Mann’s and Hodgson’s sold the business in 2005 and it had 55 employees. Big Timber had run for 28 years.