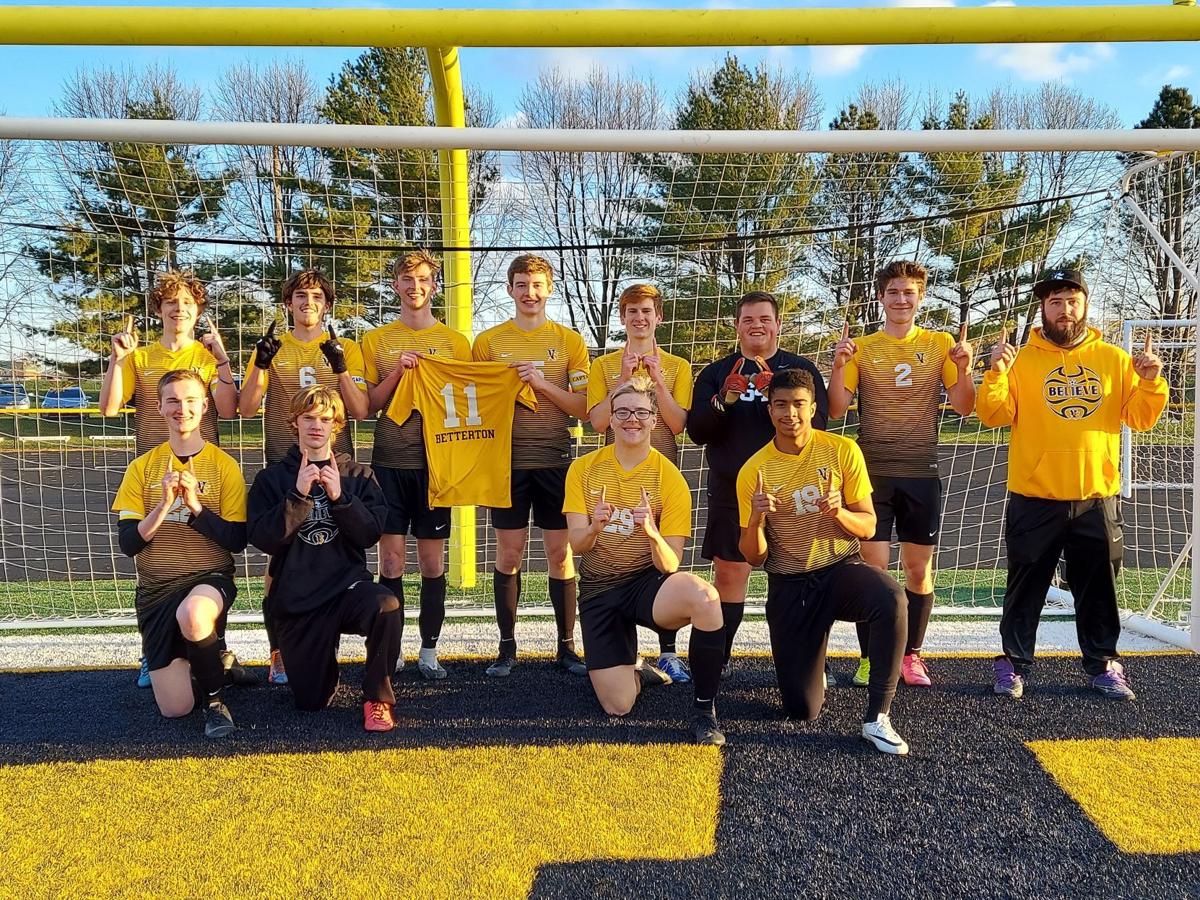 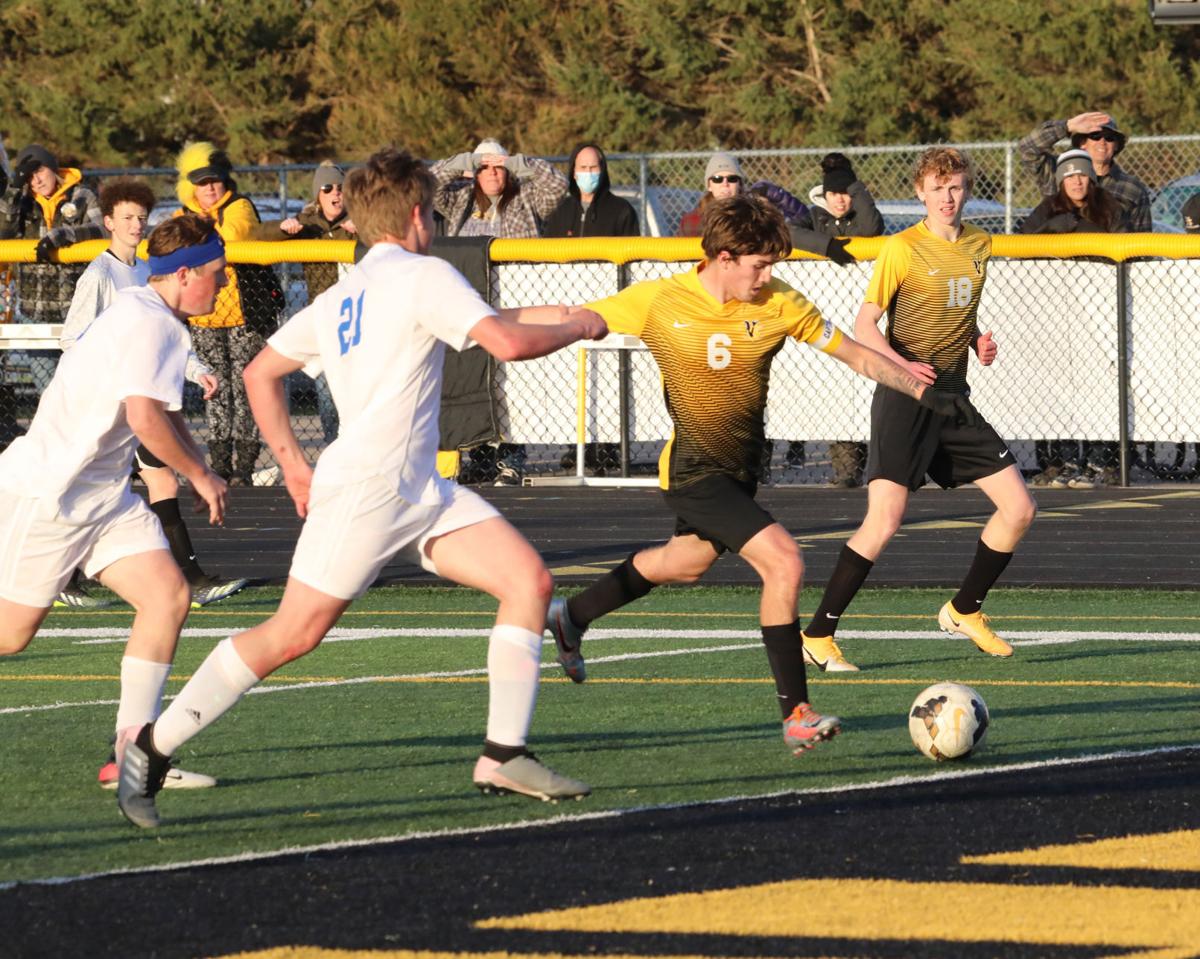 VS senior David Lapan-Islas scored the match’s lone goal in the first half to led the Vikings past the Clippers 1-0. Lapan-Islas also had five goals the next day vs Mt. Vernon and leads the state in goals with 15 goals as of publication.

VS senior David Lapan-Islas scored the match’s lone goal in the first half to led the Vikings past the Clippers 1-0. Lapan-Islas also had five goals the next day vs Mt. Vernon and leads the state in goals with 15 goals as of publication.

Viking soccer is back after last season’s cancellation, but one member was sorely missed on the field as the program remembered Mike Betterton in a 1-0 win over 14th-ranked Clear Creek-Amana on Thursday.

“Mike was a big part of our team,” senior CJ Rickels said. “To have a game specifically where all the fans know we’re playing for him is important. We’re playing all our games this season for him.”

Bettterton died in October of 2019, but the cancelled 2020 season postponed honoring the former Viking on the soccer field for a year. Fans dressed in camo and #MBStrong t-shirts as they support VS in their biggest test of the early season in the Clippers.

“We knew these guys were gonna be tougher than our previous opponents,” coach Kyle McAbee said. “We had to play lights out, which needed to start with our midfield and all the back to our defenders and goalkeepers. It’s been a great year so far and we want to keep that momentum going.”

Going into Thursday’s matchup, the Vikings had no issue finding the back of the net this season, outsourcing their first four opponents 38-0 and completely shutting down opposing offenses. CCA’s offense was more imposing and gave the backline and midfield a challenge for the first time in 2021, but the Vikings continued their season shutout. Senior David Lapan-Islas had the game’s lone goal in the 25th minute of the game, honoring his former teammate “Mikey” with the assist.

“He was the glue for our team that held everyone together,” Lapan-Islas said. “Not having him this year really hurts, but that’s just more motivation for us. To keep getting these wins. Tonight, that was huge.”

VS couldn’t come up with an insurance goal in the second half, but the defense continued to deny open shots for the Clippers and the midfield dominated possession of the ball. Junior Kale Schulte credited Betterton’s “fire” carrying over into this team as they held back the Clippers for their fifth win of the season.

“I played with him for one season and he always had that fire in him and put in us,” Schulte said. “That’s carried over into our team today.”

The senior class was all smiles after the final horn, posing for a photo with Betterton’s number 11 jersey by the goal. McAbee noted this season’s motto is “Believe”, including the 11 players on the field at any given time.

“That motto has worked out for us so far this season,” McAbee said. “It’s been a complete team effort. David and CJ are both moving up our all-time scoring lists. They’ve had fun competing against each other with that. David is leading the state in made goals.”

The Vikings’ season shutout ended the next day as Mt. Vernon scored three goals on VS, but Lapan-Islas alone outscored the Mustangs with five goals and 11 from the team. VS is 6-0 on the season and will enter a tougher second half of their schedule against talented teams such as Beckman Catholic and Solon away from home.

“We’re in a good position and it will be hard for anyone in the WaMaC West to catch up to us,” McAbee said. “It will be difficult going forward, but we do have our sights set on winning the WaMaC outright and competing for an undefeated season.”

VS will travel to Marion on Friday. Only two of their seven remaining events will be at home this regular season.