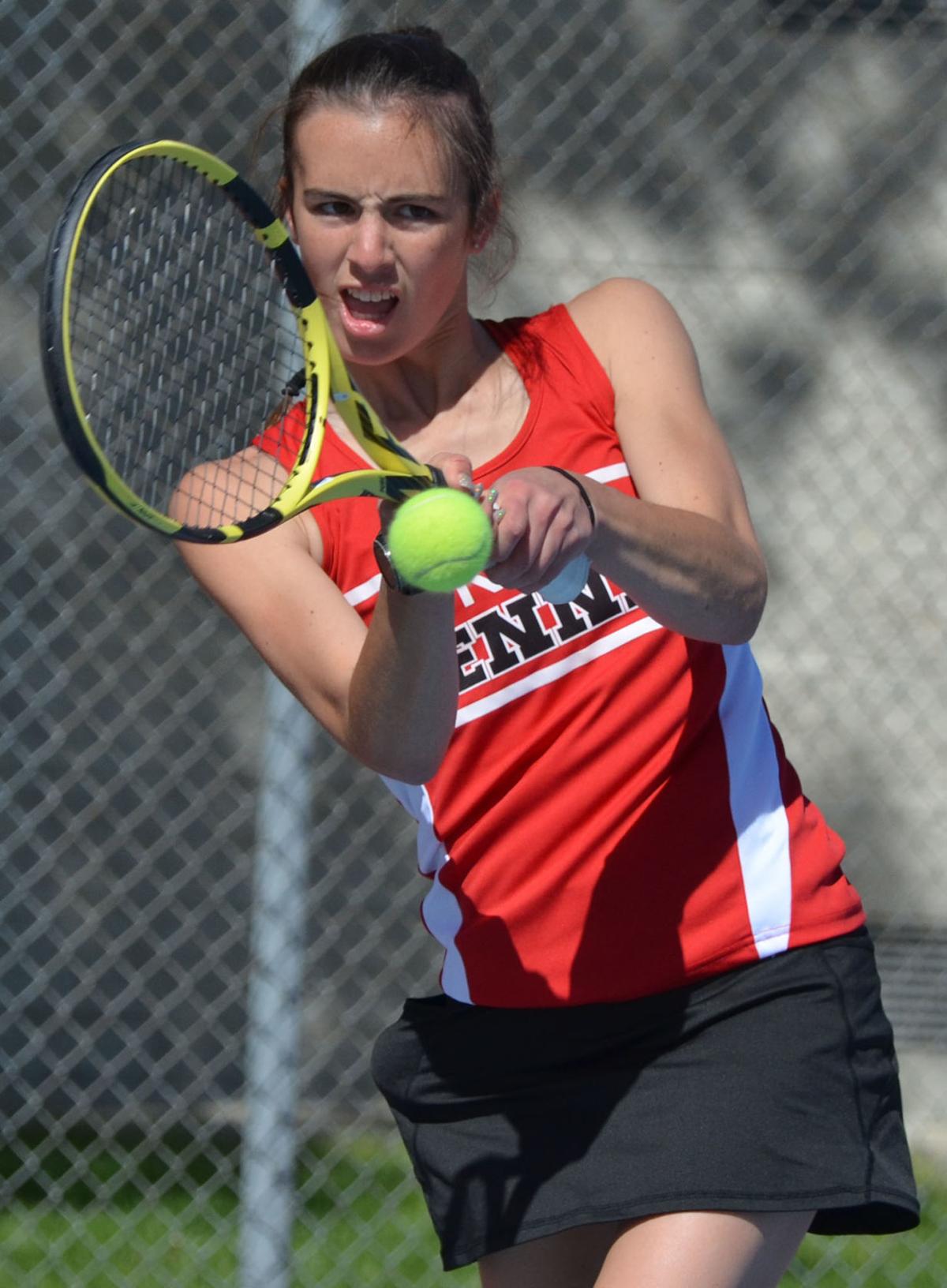 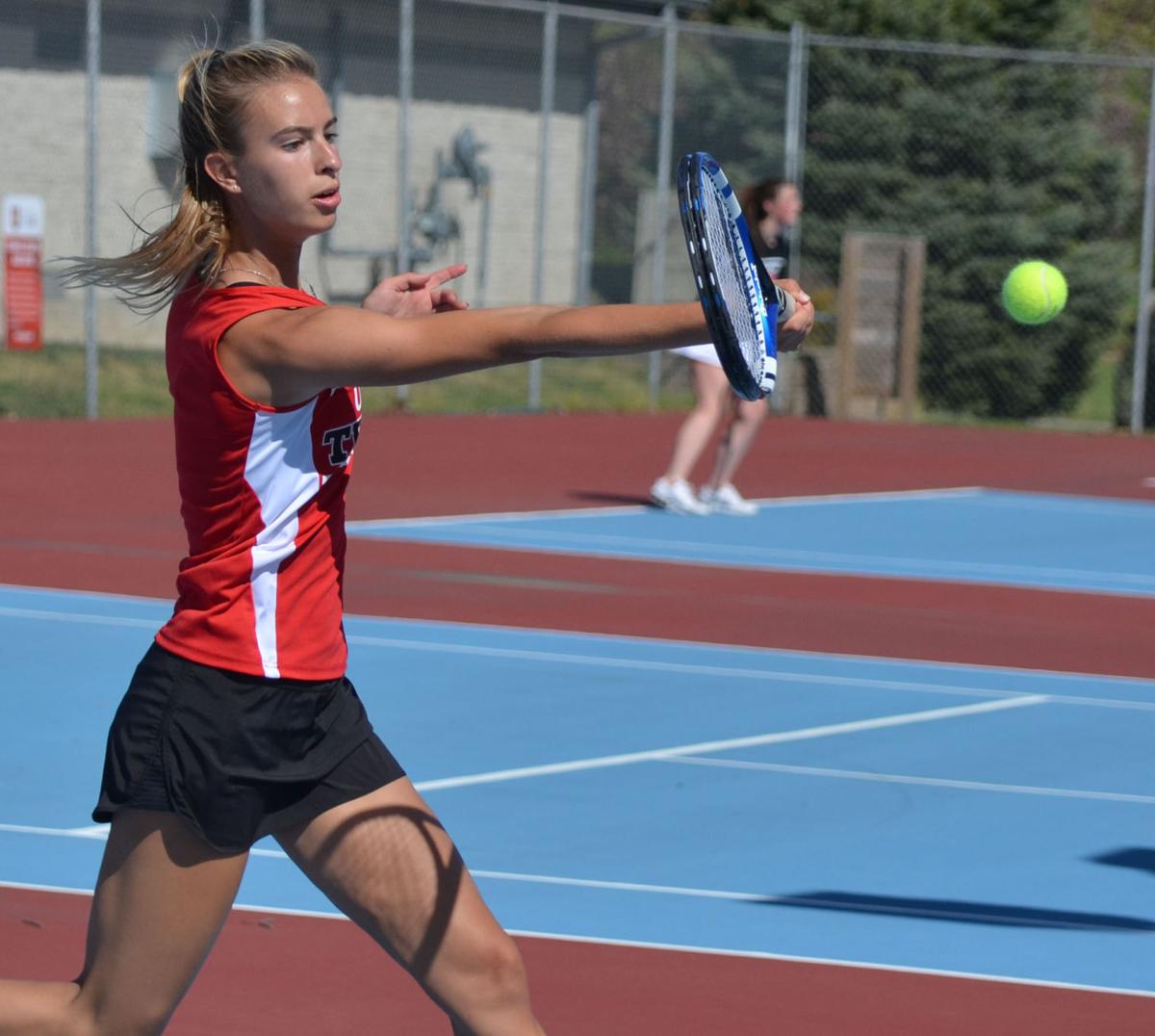 Union Community’s Belle Weber hits a forehand return during a NICL match against Aplington-Parkersburg on Tuesday in La Porte City.

Union Community’s Belle Weber hits a forehand return during a NICL match against Aplington-Parkersburg on Tuesday in La Porte City.

Union’s girls tennis team is moving toward an unbelievable ending to its regular season, which closes Friday against Decorah at home.

The Knights (10-0) took another step earlier in the week with a 9-0 win against South Tama on Monday and a 7-2 win against Aplington-Parkersburg on Tuesday.

“Our team has had great opportunities to play talented teams throughout the region,” head coach Erin Wittenburg said Wednesday. “These girls have been highly coachable, welcome challenges, look forward to competition and are eager to play the game knowing for most, it is their final season with the Knights.”

With a scoring standard of eight-game pro sets Tuesday, Union opened with all six singles wins to clinch the match. It was the Knights’ second win against the Falcons in two seasons; Union beat A-P 5-4 in 2019.

“Since I have intermittently coached the team, AP has consistently been a tougher team for Union and they have a solid set of seniors playing for them again this season,” Wittenburg said. “We were pleased to take the singles from AP which took the pressure off of the doubles.

“We made some mistakes that cost us in the end as our kids had to be at an evening performance cutting the night short, but we were very pleased with the outcome and grateful to finish where we have in the NICL conference to date.”

“Alexa and Belle Weber continue to be a force individually and as a doubles team,” Wittenburg said. “As sisters, they talk a lot of smack, but know just what to say to motivate each other to get the best out of each other. They highly encourage each other with tips, motivation and just as much encouragement when needed.”

Sunshine Gray, Mady Rathe and Sophie Winkelpleck all won 8-2 at Nos. 4, 5 and 6, respectively.

“This is (Sunshine’s) first season playing tennis and she works hard outside of practice times to improve her skills,” Wittenburg said. “Mady is one of the most optimistic players no matter what the circumstance. She is incredibly positive and works hard in practice and with her partners.

“Sophie is a force as a leader and as a player. She plays strong and is a great communicator with her double partners.”

“Ellie Behrens has stepped up to be a top competitor in singles working hard to get everything back to her opponent,” Wittenburg said. “She is easily coachable and willing work during her matches on game winning strategies.”

Monday’s win against the Trojans came with little strings. Belle Weber participated in a weekend sand volleyball tournament in Alabama over the weekend and came off the plane to win, 8-1, at singles and team with Alexa to win 8-0 in doubles play.

Belle also had to run a timed mile after the match for a senior PE requirement, according to Wittenburg.

“The more active Belle is, the stronger she plays,” the coach added. “She was even stronger (against) Aplington Parkersburg. She is playing some of her best tennis these past two weeks.”

“They care about ‘team,’ put their best efforts in daily and want everyone to succeed,” Wittenburg said. “They are a great group of selfless girls who are getting to enjoy the benefits of what it means to be ‘all in.’”

The Knights host Decorah today and then participate in the first two rounds of the Region 1 team tournament Saturday. The Knights face South Hardin at 9 a.m. and either Boone or North Polk at 1 p.m. should they win.

Partly cloudy skies during the morning hours will become overcast in the afternoon. High 44F. Winds NNE at 5 to 10 mph.