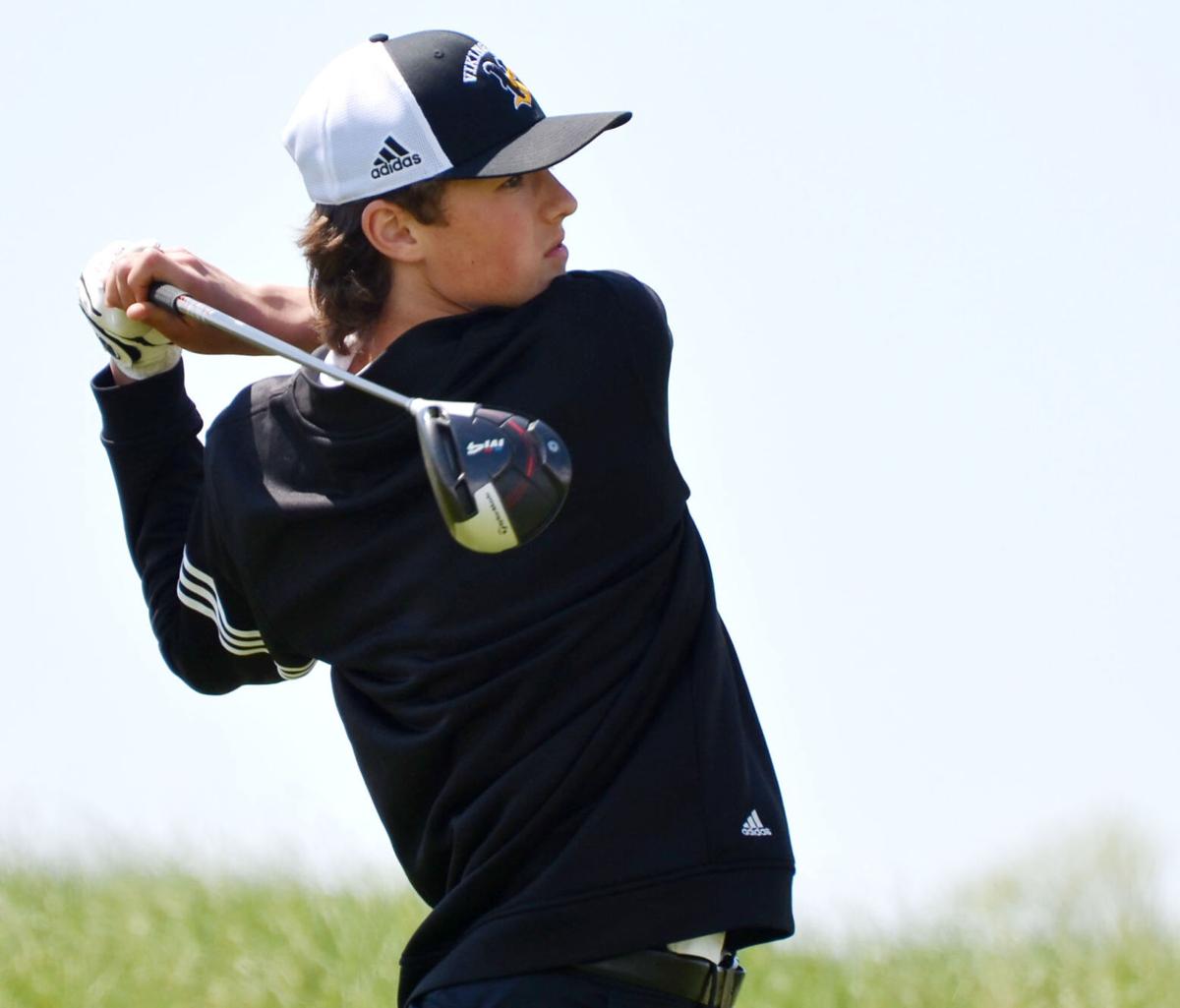 Vinton-Shellsburg’s Brayden Almquist tees off during the WaMaC Super Meet on Monday at Wildcat Golf Course in Shellsburg. 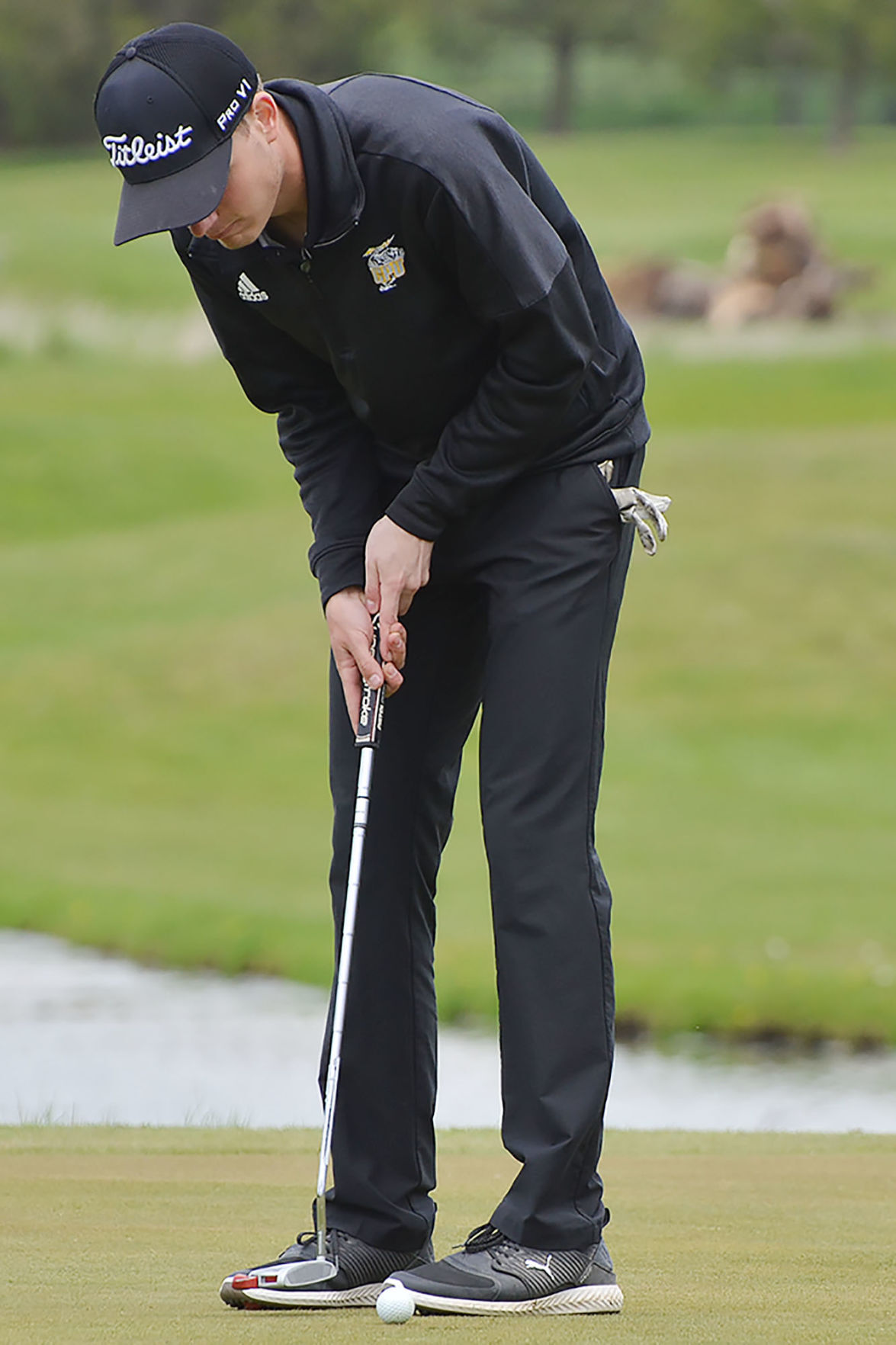 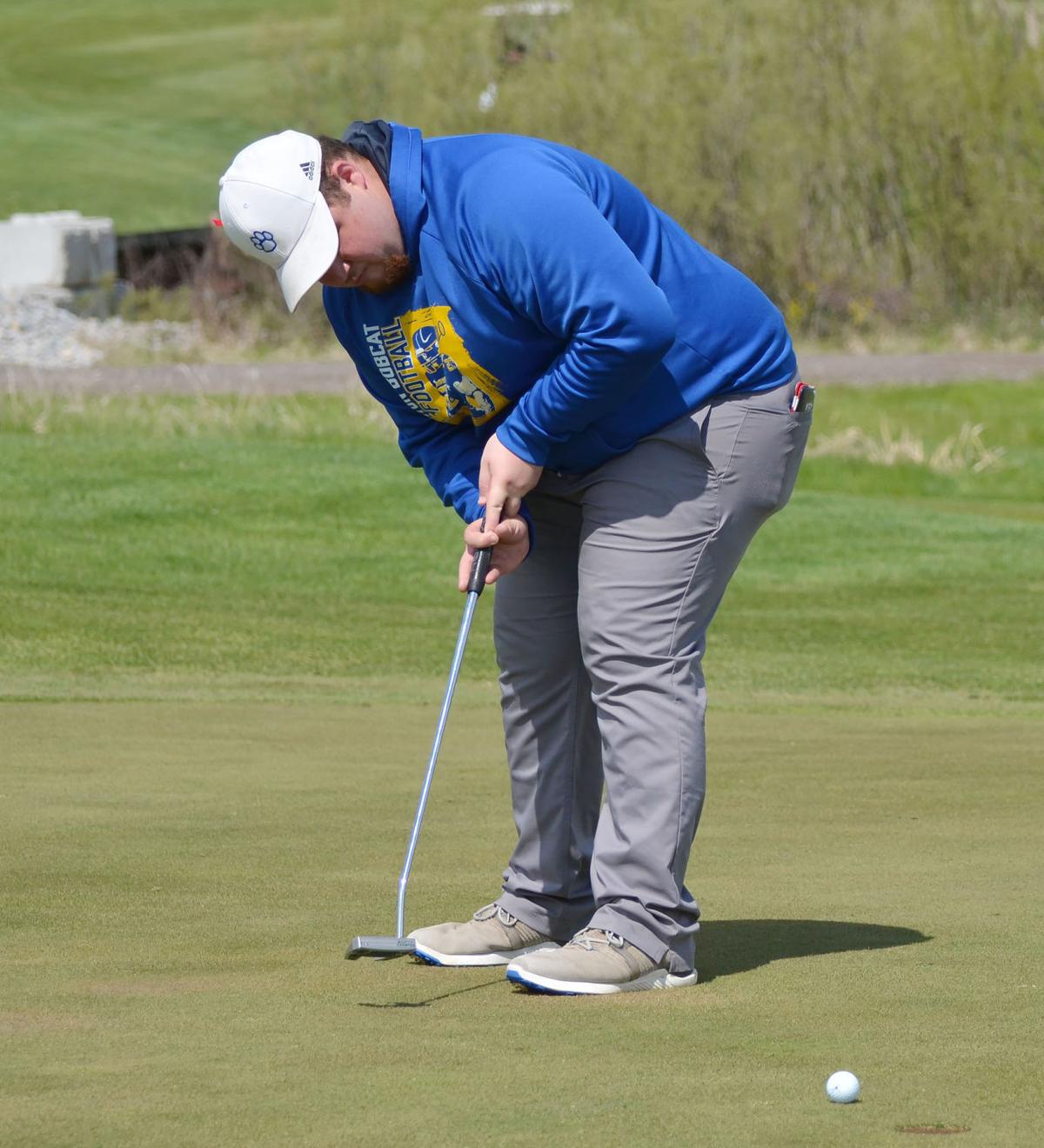 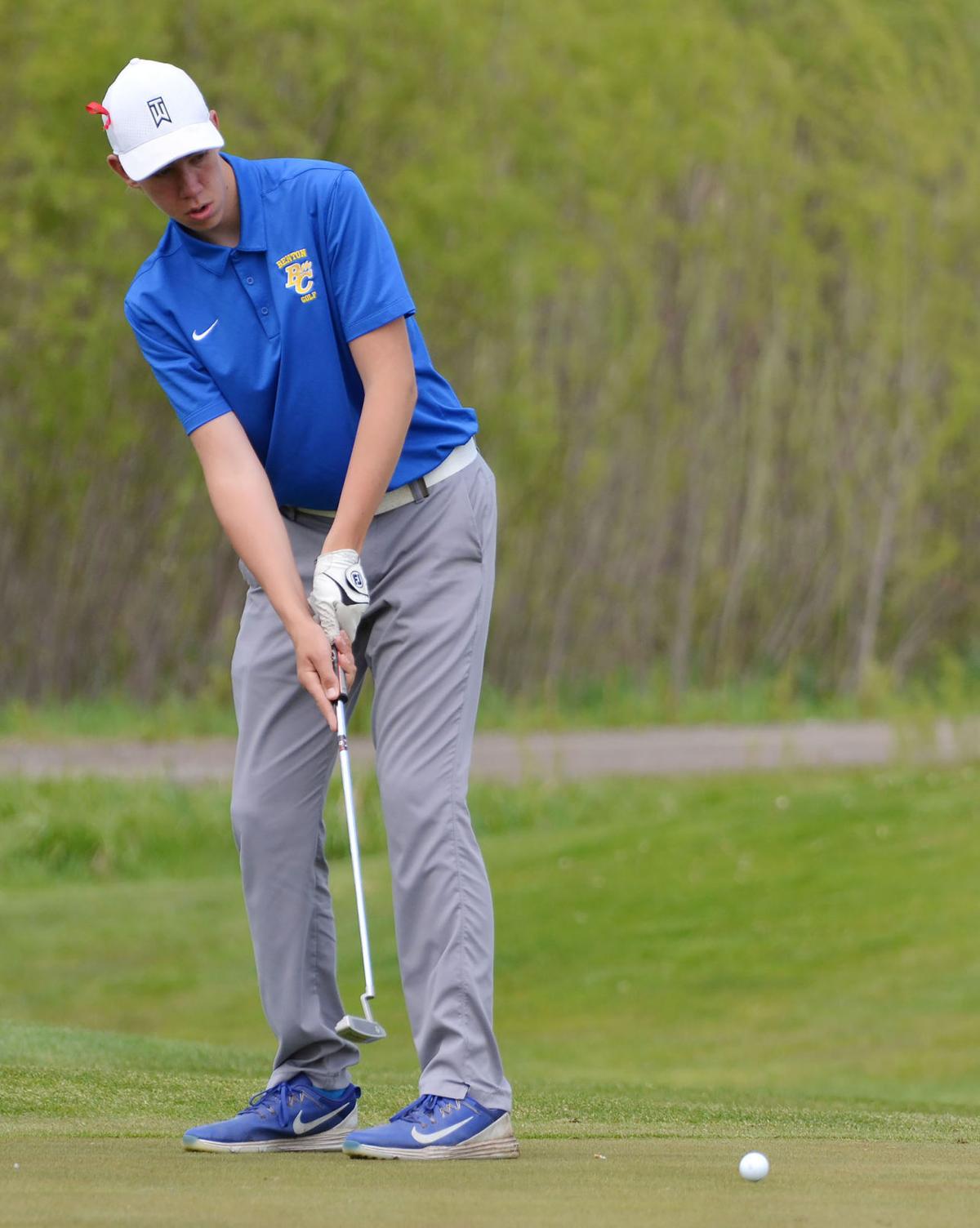 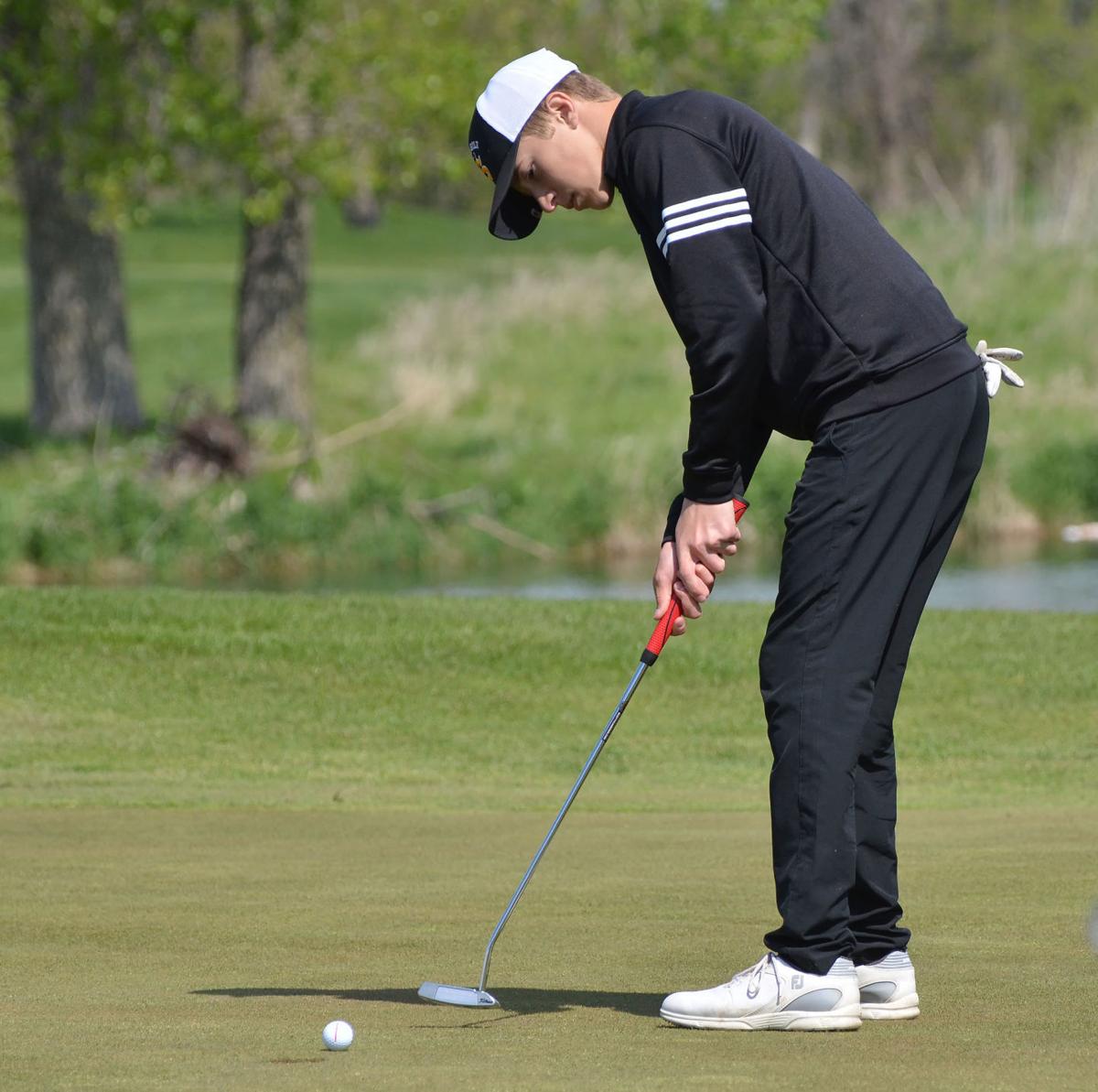 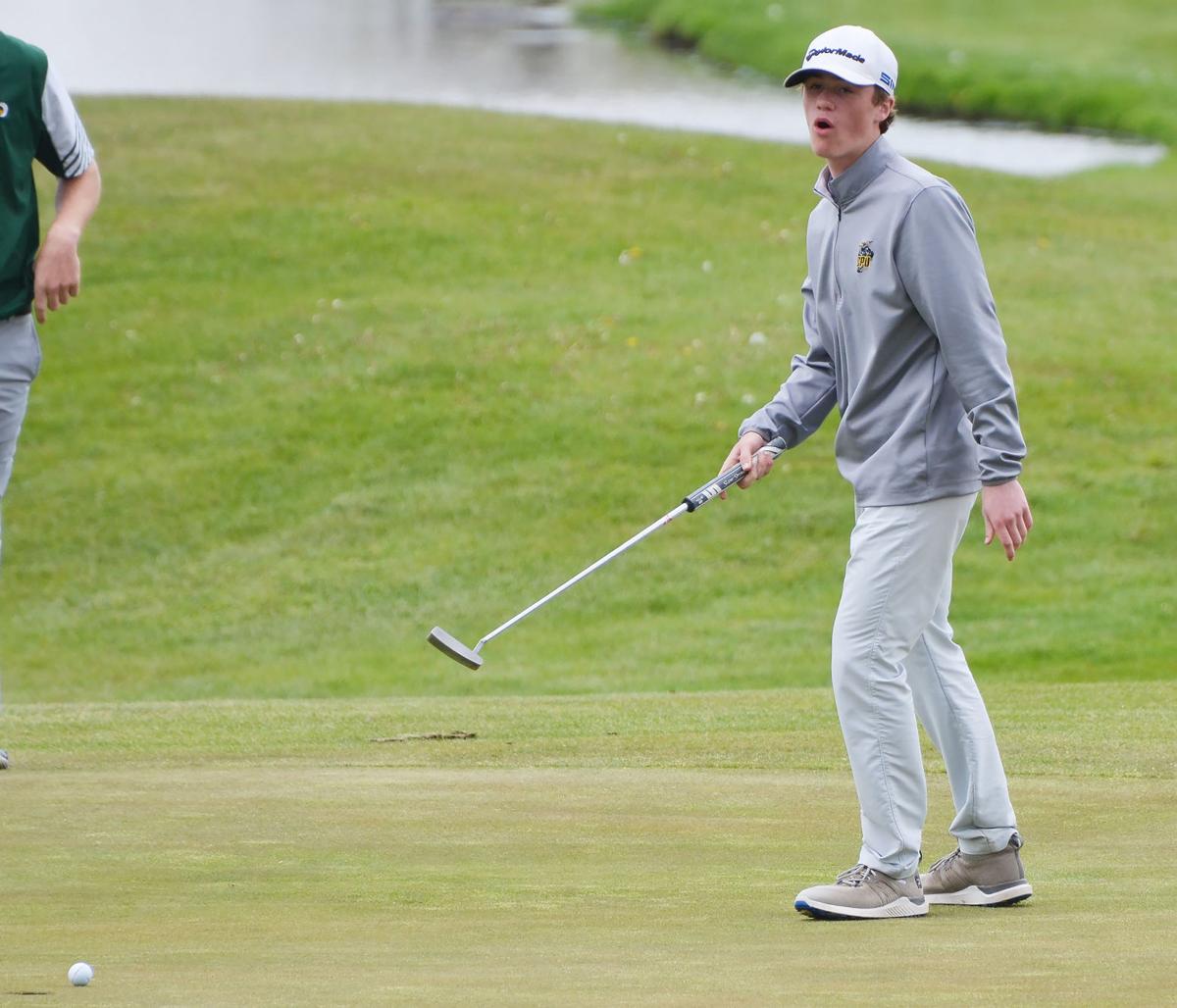 Center Point-Urbana’s Christian Burkhart reacts to his putt come up just short during the WaMaC Super Meet on Monday at Wildcat Golf Course in Shellsburg.

Vinton-Shellsburg’s Brayden Almquist tees off during the WaMaC Super Meet on Monday at Wildcat Golf Course in Shellsburg.

Center Point-Urbana’s Christian Burkhart reacts to his putt come up just short during the WaMaC Super Meet on Monday at Wildcat Golf Course in Shellsburg.

Almquist used his back-nine trio of birdies to help cut three strokes down and card a 73. Almquist tied for second with West Delaware’s Elias Tibbett and was slotted third after a scorecard playoff.

Almquist registered a front-nine 38 and followed with a 35.

“I thought Brayden really picked up momentum on the back nine,” head coach Chad Pettyjohn said. “His front nine was fine, too, but he picked up a lot birdieing 11 and 12. I really thought he felt good about it.”

The Vikings carded a 340 to tie for seventh alongside Maquoketa and Williamsburg. Center-Point Urbana tied for fifth with a 338, two strokes ahead of Vinton, while Benton Community shot a 357 to place 12th.

“Got a couple double bogeys but then I’d turn around and get a birdie. So I kept going,” Metzen said. “Some holes (a bad shot) kinda stays with me, but others I just ignore it and focus on the next hole.

Teammate Christian Burkhart opened on the back nine and was one-under through his first eight holes. He triple-bogeyed 18 and spent most of his second half playing bogey golf.

“Missed a few birdies putts, but nothing to be really mad about,” he said. “It was a little hard (to triple No. 18), but I had a few strokes to give. I just had to keep my head up and move on to the next nine.”

Ben Opfer carded an 89 and Brayden Beck shot a 92 to round out the team scoring.

“I think they’re going to look back and there’s going to be holes or shots they wish they had back,” head coach Matt Gressen said. “But I also think they were resilient in that if they did have a bad hole, they came back to just finish a good round.

“I don’t think anything necessarily surprised me. Our boys know they can shoot low out here — it’s a matter of putting it all together.”

Metzen and Burkhart were named first-team and second-team all-conference, respectively. CPU’s contingent noted it was helpful to play a full 18 on their home course in a postseason setting. Today’s district meet is on the same course.

“We have a good benchmark for Friday, I’d say,” Burkhart said.

Added Grennen, “It’s an advantage to have a tournament here beforehand. Hopefully we can keep the ball rolling and take it into Friday.”

Vinton-Shellsburg’s Carter Lamont posted a 78, dropping two strokes from his front-nine 40. He settled into the back nine with four straight pars and six overall in his final nine.

“It’s a big confidence booster,” Lamont said. “I know it’s late in the season, so these rounds are kind of important and the pressure is up. But I felt good about my swing and I was feeling confident. It was a good round I put together.”

“We left some strokes out there, got a little into the ‘nomo’ more than what I would have liked,” Pettyjohn said. “But overall to have a couple solid scores come in — we needed a fourth and fifth score we just didn’t quite get today.

“But I don’t think the kids did poorly by any stretch of the imagination. They competed well and I’m proud of them.”

The Bobcats earned two second-team all-conference nods when Matthew Parmenter and Dylan Niebes both carded an 82 to place 19th and 20th, respectively. Parmenter registered a 40-42 split and Niebes went 41 on each side. Niebes birdied the par-4 No. 11 and stuck his drive on the par-3 No. 12 within a few feet and ended his round with a par.

“That wasn’t too bad. It was nice to finish good,” he said of the final hole. He had two birdies in his round.

“Eighteen holes is a lot of holes to play, to bounce back,” Niebes added. “Nine holes you have to get locked down fast, but 18 you can have a couple bad holes and still come in with a decent score.”

Parmenter birdied the par-4 No. 3.

“Definitely could have been a lot better,” Parmenter said. “I just tried to get out of my head. I had a fun group to play with. Joking around kinda loosened me up.”

AJ Parker shot a 90 and Ty Kulbartz posted a 103 to round out the team score.

“It’s exciting for Matthew and Dylan — they’ve been improving all year and it’s nice to see what they can do before sectionals,” head coach Jeremy Suiter said of their all-conference wards. “We need to get some consistency with our lower guys to put up a better top-four score. That’s something we’ll have to work on.”

All three teams will reconvene today at the same course.

“Learned where to put shots. Now we’ll try to play it safe and not always go for it,” Parmenter said. “Playing the course a couple times in the last two weeks has definitely helped us out.”

Added Pettyjohn, “Now we might have a better understanding of the angles and other things. A lot of times, golf is about where to miss rather than always try to go pin seeking.”