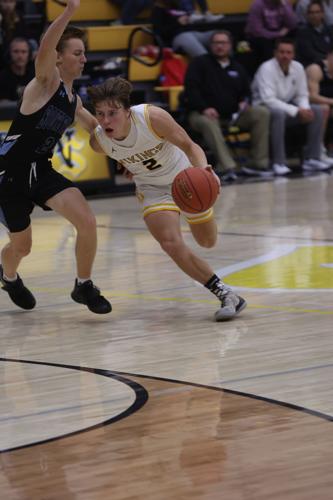 Senior Austin Kemp drives for the bucket for two of his career-high 21 points last Tuesday night in Vinton-Shellsburg’s 65-42 win over South Tama. 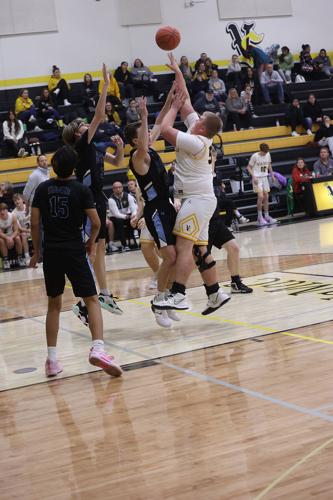 Viking center Brodee Klein puts up a shot in traffic in the early going of Vinton-Shellsburg’s 56-42 win over South Tama.

Senior Austin Kemp drives for the bucket for two of his career-high 21 points last Tuesday night in Vinton-Shellsburg’s 65-42 win over South Tama.

Viking center Brodee Klein puts up a shot in traffic in the early going of Vinton-Shellsburg’s 56-42 win over South Tama.

VINTON — Another win for Vinton-Shellsburg basketball, another career high as the Vikings defeated South Tama on Tuesday to go into break with two wins under their belt.

“Going into a 10-day break with a win feels much better than going in with a loss,” coach Austin Mullikin said. “South Tama came to play and this is still a WaMaC game. We still had to come out and play tonight.”

Drawing upon their success the previous night, the Vikings continued to apply their press and disrupted the Trojans offense. VS took a 20-15 after one quarter with junior Brodee Klein drawing a foul on a made bucket at the buzzer. South Tama closed the small gap and briefly took a lead before the Vikings closed up the half 31-30.

“I felt we came out flat in the first half and told them there are no easy games in this conference,” Mullikin said. “Again, I challenged them to come out with more attitude and effort. We came out a different team that second half.”

While the Vikings certainly added more cushion to their lead with a five point different in the third quarter, it would be the fourth quarter where they would wrestle the game away from the visiting Trojans. A 19-2 run for VS would slam the door shut and secure their second consecutive win.

“The transition really sets up our offense, and the press gets us into that well,” Mullikin said. “The boys like to play fast. It lets them be more athletes, less thinking.”

Junior Cameron Dunbar had another 20 point game after a career high 27 the previous night. However, Tuesday was senior Austin Kemp’s moment to shine as he scored his own career-best 21 points, also adding four assists and three steals to his total.

“Austin was one of the guys, when I took the job in May, who was showing up for open gyms every time,” Mullikin said. “His shot hasn’t been there for him a couple of games, but tonight he shot it well. I also think we saw some big defense out of him.”

VS (2-6) will resume their season on January 6 at Marion.

FOR SALE: Used golf balls. Clean and in good shape.

Memory Of Mary Rasmussen (Blaness) Whether you attended Mary's Memorial