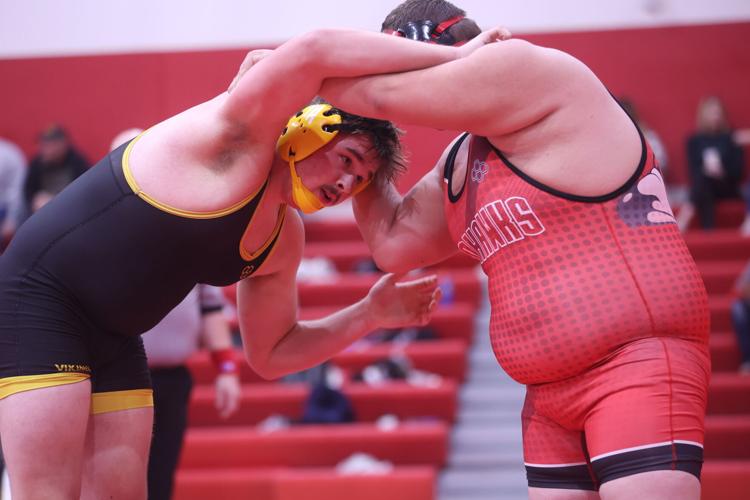 Must be the ‘stache! VS senior Parker Arnold made his high school varsity debut on Thursday and picked up two wins. 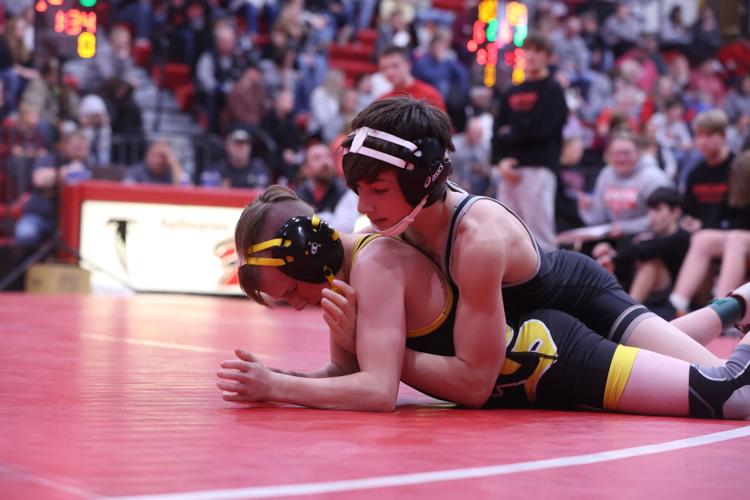 Union freshman Kaydin Jones holds VS freshman Eli Ollinger as the former picked up a pin in the second high school match for both boys.

Must be the ‘stache! VS senior Parker Arnold made his high school varsity debut on Thursday and picked up two wins.

Union freshman Kaydin Jones holds VS freshman Eli Ollinger as the former picked up a pin in the second high school match for both boys.

PARKERSBURG — Union and Vinton-Shellsburg wrestling started off their 2021-22 seasons at Aplington-Parkersburg on Thursday against each other, North Tama and the combined program of A-P and Grundy Center, with the Vikings emerging victorious over all three dual opponents.

“We have so many new guys on the team this season that I wasn’t sure what to expect out of our first duals,” VS coach Brian Sheston said. “You see them work hard in practice, but you never know how it translates on the mat. I was impressed with how we wrestled.”

The Vikings opened with North Tama and flexed their depth over the smaller Redhawk lineup. North Tama would get two wins in the dual, including a battle of 2022 State qualifiers between NT’s Kolt Knaack and VS’s Carter Lamont, the former getting a fall in 3:12. Otherwise, the Vikings got five pins and picked up five forfeits to win comfortably 63-18. Senior Cooper Sanders had the quickest fall, pinning his opponent in 52 seconds.

“North Tama has some good kids out right now,” Sheston said. “They have holes in their lineup and we’ve been there a lot of years. Matchups were the difference.”

Meanwhile, the Union Knights saw their season open with a 46-34 loss to the host Falcons. They took on the Vikings next hoping to bounce back from their defeat. VS senior Parker Arnold picked up his second win of the day with a pin of Union’s Corbin Clark in the second period. Union freshman Mays Weber and Kaydin Jones picked up pins at 106 and 113 lbs and sophomore Jace Hedeman received a forfeit to give the Knights an 18-6 lead. But Union’s holes in their lineup and four VS pins quickly turned the tide back in the Vikings’ favor on their way to a 60-24 win.

“We did what we could with what we had,” Union coach Bart Mehlert said. “We’re working with a limited lineup. We’ve seen some good things, we’ve seen some bad things today. It was fun to finally beat up on someone other than our own team today. Guys were willing to move up weights today for the team.”

The Knights finished their day with a 53-18 win over neighboring North Tama. Junior Keegan Ellsworth went 3-0 on the day, Jones 3-0 with two pins.

VS ended their night with its closest challenge in AP-GC 47-36. Two forfeits by each team canceled one another out. Three pins in a row by junior Aldin Swanson at 126, junior Owen Mullinex and junior Carter Lamont put the Vikings on top and senior Curtis Erickson slammed the door shut on AP-GC with a fall in the first period.

“AP-GC has 30 kids out and definitely were able to fill out their lineup better than the last few seasons,” Sheston said. “That’s great for them, but we were able to take advantage of guys with more experience.”

The Vikings completed their first week of the season with a fourth place finish in a tournament at Monticello on Saturday. Sanders was the lone champion for the Vikings.

“For as good as Thursday went, reality hit us on Saturday,” Sheston said. “Some guys had tougher matches and mistakes led us to not perform as well. We’ve got more tough tests coming up they’ll need to face.”

The Vikings will travel to Manchester on Thursday to face West Delaware and Center Point-Urbana before traveling to South Winneshiek on Saturday for a tournament.

Some sun in the morning with increasing clouds during the afternoon. High 36F. Winds WNW at 10 to 15 mph.