You are the owner of this article.
Edit Article Add New Article
You have permission to edit this article.
Edit
Welcome, Guest
Home
News
Sports
Opinion
Obits
Lifestyle
Multimedia
Classifieds
Marketplace
Share This
1 of 2 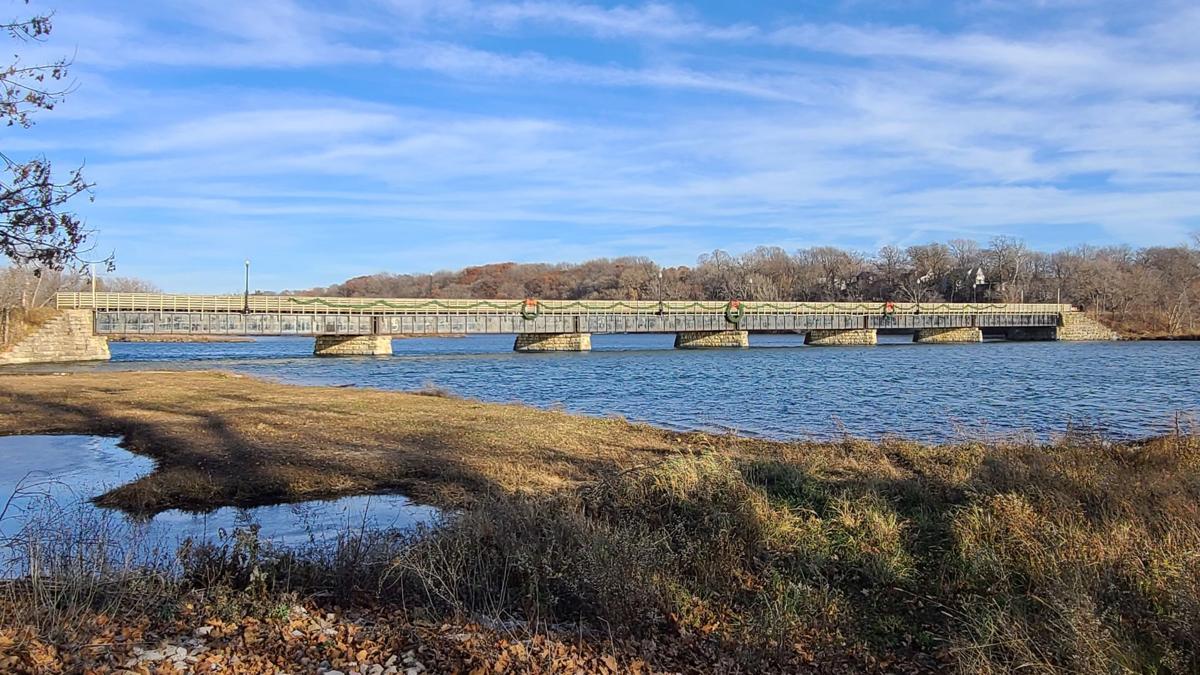 The Rail Trail Bridge is all decked out for the holiday season. The Waverly City Council will soon consider plans to repair or replace it after City Engineer Mike Cherry presented an inspection report showing the limestone in the piers and abutments are seriously deteriorated. 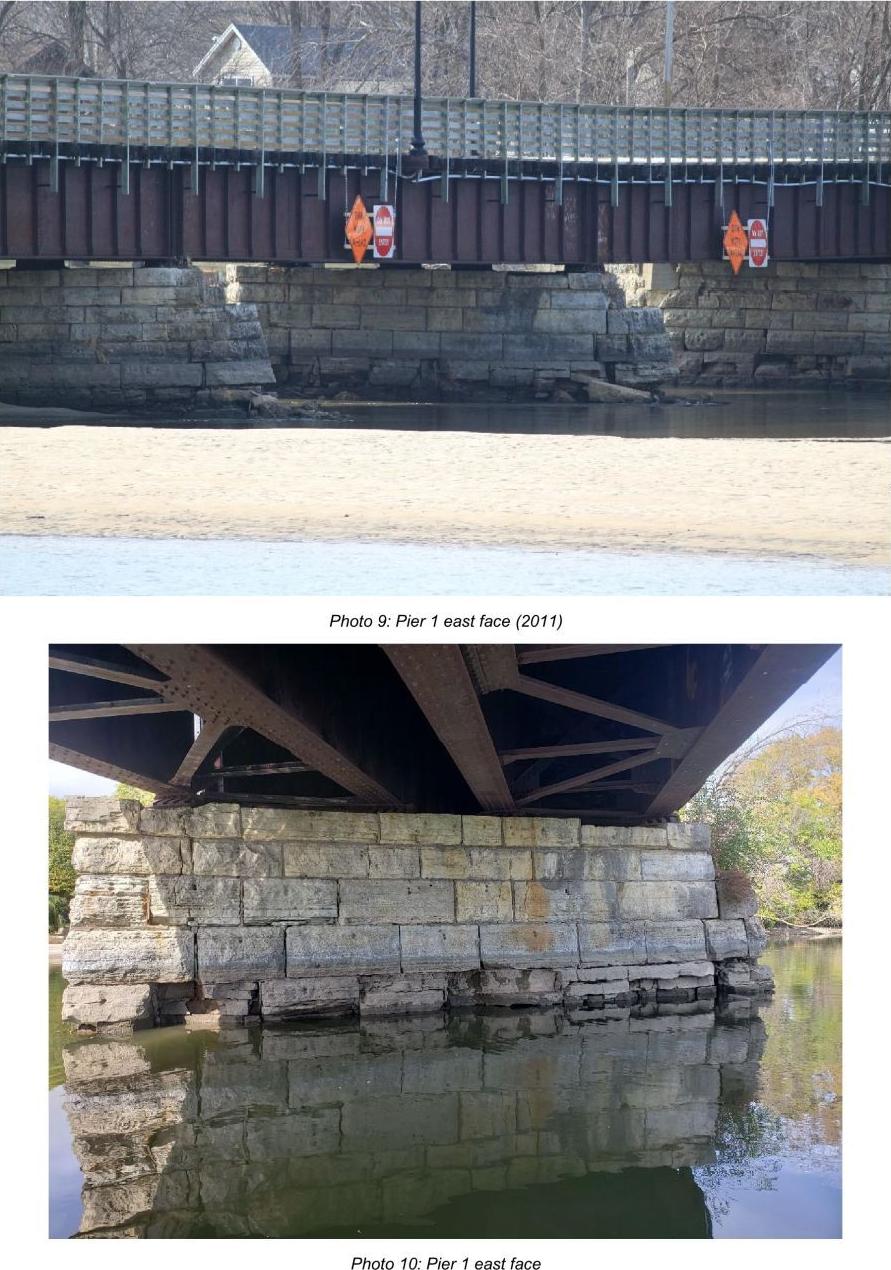 In these photos from both the City of Waverly and WHKS & Co., the limestone blocks along one of the piers below the Rail Trail Bridge have been deteriorating over the last 10 years. The top photo is of the western-most pier from 2011 and the bottom is a photo taken of the same pier in September.

The Rail Trail Bridge is all decked out for the holiday season. The Waverly City Council will soon consider plans to repair or replace it after City Engineer Mike Cherry presented an inspection report showing the limestone in the piers and abutments are seriously deteriorated.

In these photos from both the City of Waverly and WHKS & Co., the limestone blocks along one of the piers below the Rail Trail Bridge have been deteriorating over the last 10 years. The top photo is of the western-most pier from 2011 and the bottom is a photo taken of the same pier in September.

With the prolonged discussions over the fate of the Third Avenue Southeast Bridge fresh in the rear view mirror — which led to the Green Bridge’s demolition — City of Waverly officials hope that the same problems don’t resurface with an even older span in town.

City Engineer Mike Cherry gave a report to the Waverly City Council during its study session Monday about the Rail Trail Bridge that crosses the Cedar River and connects parts of a very popular walking and biking path that was once a railway last used by the Dinner Train. The viaduct was built in 1904 and was converted to a pedestrian bridge in the 1990s.

Cherry said that the city had last inspected the limestone that makes up the abutments and the five piers under the bridge in 2011, when the water was lowered to build the inflatable dam. The river was reduced again earlier this fall to build a culvert along Cedar Lane, which allowed for another once-over.

What the inspection revealed was not pretty.

In an inspection report from Casey Faber, the bridge inspection project manager for WHKS & Co. in Mason City, there has been much deterioration over the last decade of the limestone. In fact, Faber reported there were open mortar joints below where the water line would be along with fractured blocks.

“The observed settlement is not advancing at a noticeable rate, but the capacity and stability will be reduced as the deterioration of the blocks increases,” Faber wrote.

Cherry, the city engineer, told the council on Monday that he noted an interesting fact about the bridge.

“Where the dam is basically sitting on bedrock,” Cherry said, “the bridge piers here, to the best of our knowledge, there is about 40 feet of sand underneath the streambed. It’s the geology of the area.

“You have wood piles that were driven down into the stand that then support the limestone piers that support the superstructure of the dual-track railroad bridge from 1904.”

Cherry reviewed photographs of the bridge’s piers and abutments from 2011 and 2021 that depict how much worse the bridge has aged between inspections. He also noted that while the vehicular bridges, including the now-condemned Green Bridge and the soon-to-be reconstructed Bremer Avenue Bridge, have two-year mandatory inspection schedules, pedestrian bridges have optional four-year look-throughs.

Prior to the closure of the span at Third Street, it underwent annual inspections starting in 2012. Faber then ordered it shut down on Feb. 15, 2015.

“Through these inspections, at some point, there may be that moment where they’re like, ‘Maybe we just can’t give it a pass for another four years,’” he said. “With this structure, the recommendation going forward is to start inspecting it every two years, and to start monitoring to see what type of settlement may be occurring.”

Cherry said that a bridge like this does have an end date for its usefulness, but is unsure when that is. He suggested that it could be as soon as 2025.

“If you get beyond that, at this moment in time, you might have 10 years,” he said. “I don’t know if there would be anyone bold enough to make that type of a prediction.”

The bridge also now has a wooden deck, which was installed in 1999. Cherry said that the deck has an approximate 30-year lifespan and said there may be some planks need replacement.

Looking back at the Green Bridge saga, where the city had a focus group look at what to do about it as soon as 2001 but the decision making didn’t accelerate until its 2015 closure. Even then, the city had opportunities to either repair it, replace it or convert it into a pedestrian bridge, but a vote or a veto had derailed efforts until a recent decision to remove it earlier this year.

“That’s going to be a similar situation to this one,” Cherry said. “You could invest a lot of money into preserving it, and that’s the decision that you’re going to be faced with at some point.”

At-Large Councilman Matthew Schneider asked what the city had done to keep up the bridge. He mentioned there was some concrete fill in the abutments.

Cherry said that was the case, but since then, other than restaining the wooden deck, there hasn’t been much maintenance to the bridge itself.

Ward 2 Councilwoman Julie Meyers wondered if there was any technology or other methods available that could restore the Rail Trail Bridge. Cherry didn’t think there was a smart-money way to do so.

“Engineering-wise, we could put men on the moon,” Cherry said. “But for Waverly to make it economical, I don’t know what that looks like.”

He added that the city had used multiple monetary sources to acquire the old railroad right of way and convert each of the bridges between Waverly and Denver to handle bicycle and pedestrian traffic. The city ended up being responsible for approximately 20-25% of the cost.

At-Large Councilwoman Ann Rathe inquired what the cost would be to replace the Rail Trail Bridge and whether the city could get similar funding opportunities to the Green Bridge. Cherry said an apt comparison would be the Barrick Road Bridge in Janesville, which was replaced in 2014 after the original vehicle bridge collapsed in 1992.

“But the existing bridge was gone by that point,” Cherry said. “Here you have to not only looking at replacing it, but also removing the existing structure, which has much cost.”