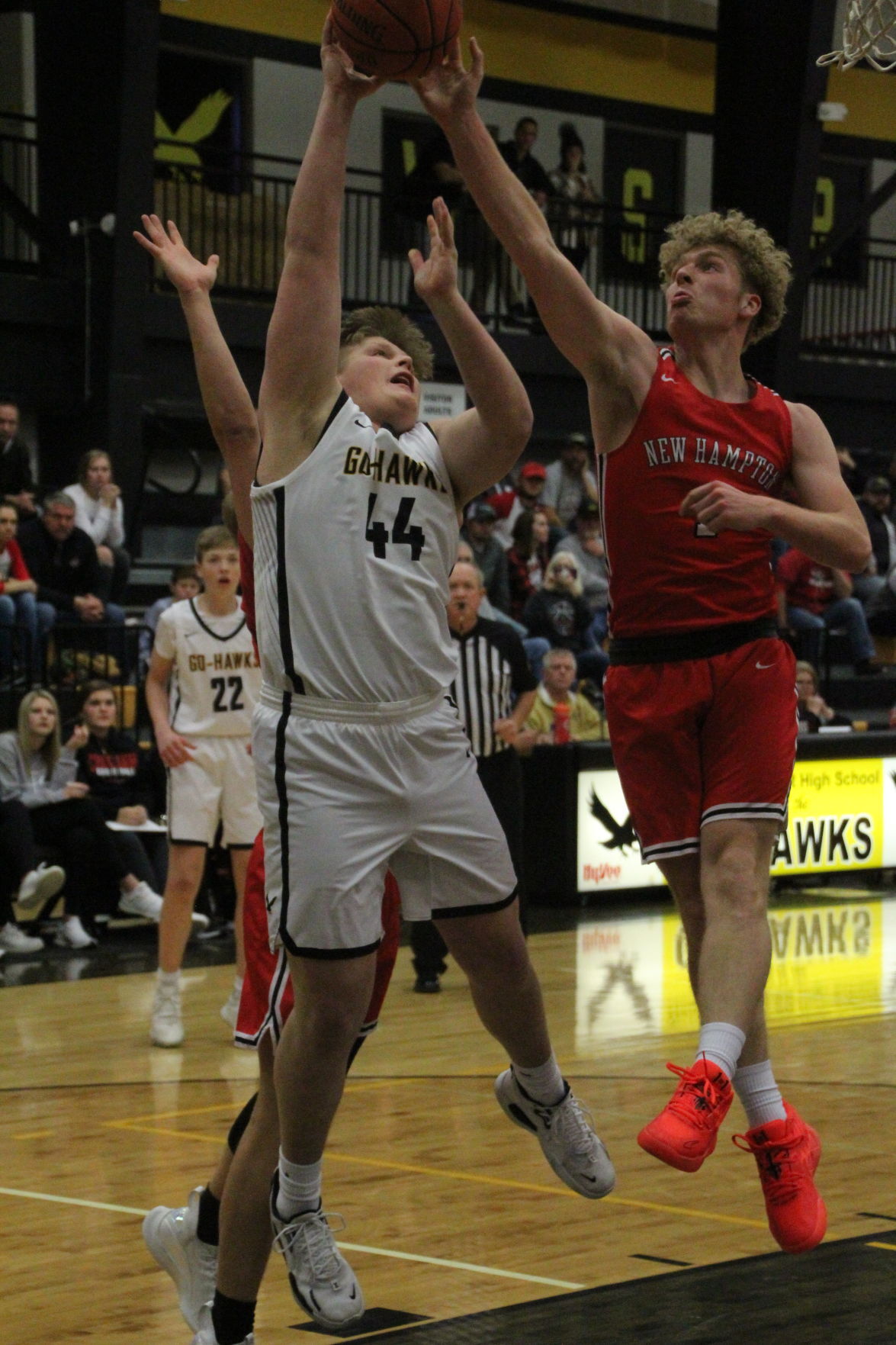 W-SR’s Cole Hotz (44) gets his shot blocked by New Hampton’s Drake Wemark (1) during the first quarter of the Go-Hawks’ 55-47 victory over the Chickasaws Thursday at Go-Hawk Gymnasium. 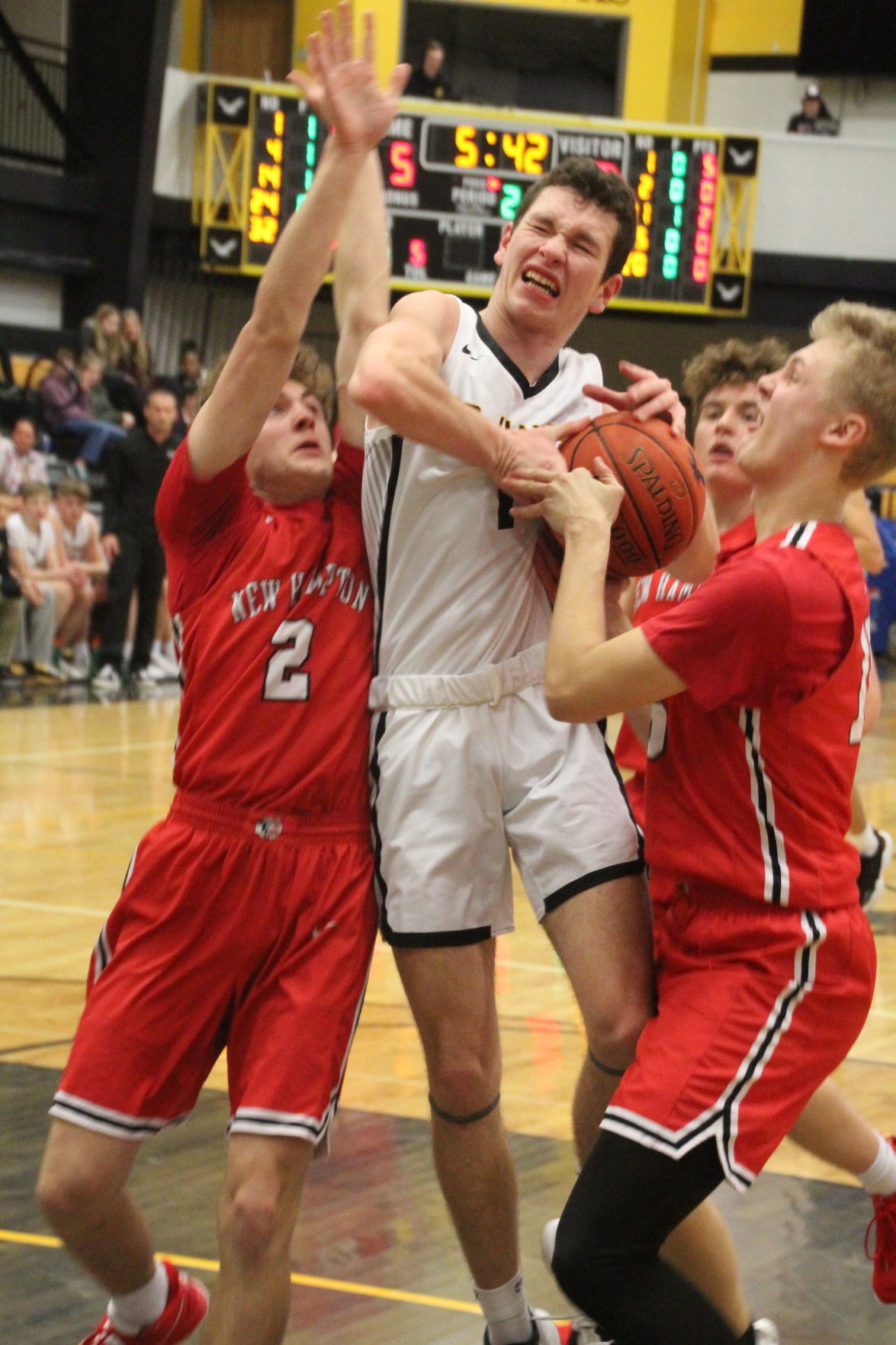 W-SR’s Keaton Farmer (1) gets tied up by New Hampton’s Gannon Shekleton (11) while also defended by Aden Ewert (2) during the Go-Hawks’ 55-47 win Thursday.

W-SR’s Cole Hotz (44) gets his shot blocked by New Hampton’s Drake Wemark (1) during the first quarter of the Go-Hawks’ 55-47 victory over the Chickasaws Thursday at Go-Hawk Gymnasium.

W-SR’s Keaton Farmer (1) gets tied up by New Hampton’s Gannon Shekleton (11) while also defended by Aden Ewert (2) during the Go-Hawks’ 55-47 win Thursday.

“It was definitely a tough game, probably played our worst game of the year,” said Farmer, a senior guard who scored 14 points against New Hampton. “But we did find a way to pull the victory out.”

W-SR struggled with missed shots and turnovers, falling behind 17-11 at halftime. However, the Go-Hawks had a hot-shooting second half to pull ahead and earn a 55-47 victory over the Chickasaws to improve to 5-1 in the Northeast Iowa Conference.

“I think in the first half, we definitely struggled,” Farmer continued. “Their zone got to us. We were trying to get the ball inside, but we couldn’t and that’s why we turned the ball over way too much in the first half, but we figured it out in the second half.”

Head coach Nate Steege agreed that the Go-Hawks (9-3 overall) performed below their standards in the first 16 minutes.

“We weren’t ready to go,” Steege said. “We didn’t execute very well, but I was happy with the way we responded in the second half.

Neither team really could get a foothold on the offensive end of the floor, as W-SR only made 4 out of 19 shots, including 2 for 10 from long range. Meanwhile, the Chickasaws (5-7, 3-3) was 6 for 20 from the floor in the initial two quarters in getting the six-point lead.

As a part of that half, Farmer was 0 for 6, 0 of 3 from behind the arc, and fellow top scorer Cole Marsh missed all three of his attempts, including both from downtown. Hogan Hansen had five points, and Clay Draper and Luis Portillo had three at intermission.

But the Go-Hawks had found a way to put their shooting touches in the microwave while at the break. Jordan Kruse made three corner 3-pointers to help pull the Go-Hawks even at 28 with 3:55 to go in the penultimate period. The lead exchanged hands several times in the remainder of the frame before W-SR took a 35-33 lead at the end of the quarter.

After that, Hansen recorded three buckets out of four attempts, and Farmer and Marsh made all of eight of their combined free throws to pull away and take the victory.

Steege said the Go-Hawks are searching for consistency in their play.

“We haven’t played four good quarters of basketball yet this year,” he said. “There’s no question that first half was one of our worst.

“We did some good things in the second half, I thought. We saw some improvements in areas that we have been talking about. We just have to keep fighting to find that consistency and put together four quarters of good basketball together.”

Farmer said that the Go-Hawks seemed to be 3-happy in the first half.

“In the second half, we started attacking the rim, putting the ball in the middle,” he said. “Once we got it inside, we were able to kick it out and get shots and drive.

“Me personally, that was my worst shooting game this year. I didn’t have a 3 (made) this game, but I thought the team stepped up pretty well. We played our worst game by far this year.”

Farmer was 3 for 11 from the floor but made all eight of his shots from the stripe. Meanwhile, Marsh had 12 points on 4 of 7 shooting and 4 for 4 from 15 feet away. Hansen added 11, and Kruse was 3 of 4 from bonus distance for nine points.

New Hampton was led by Drake Wemark with 18 points, followed by Gannon Shekleton and Carter Steinlage with 11 each.

W-SR hits the road again out of conference, heading to Manchester on Tuesday to face West Delaware. Steege had his charges take a mid-morning practice Friday prior to the meat of the snowstorm hitting the area — which cancelled classes — and then gave them the weekend off before fine tuning the game plan for the Hawks on Monday.

“We have a lot of learning (about West Delaware) to do in the (time before Tuesday) and get a good gameplan together.”