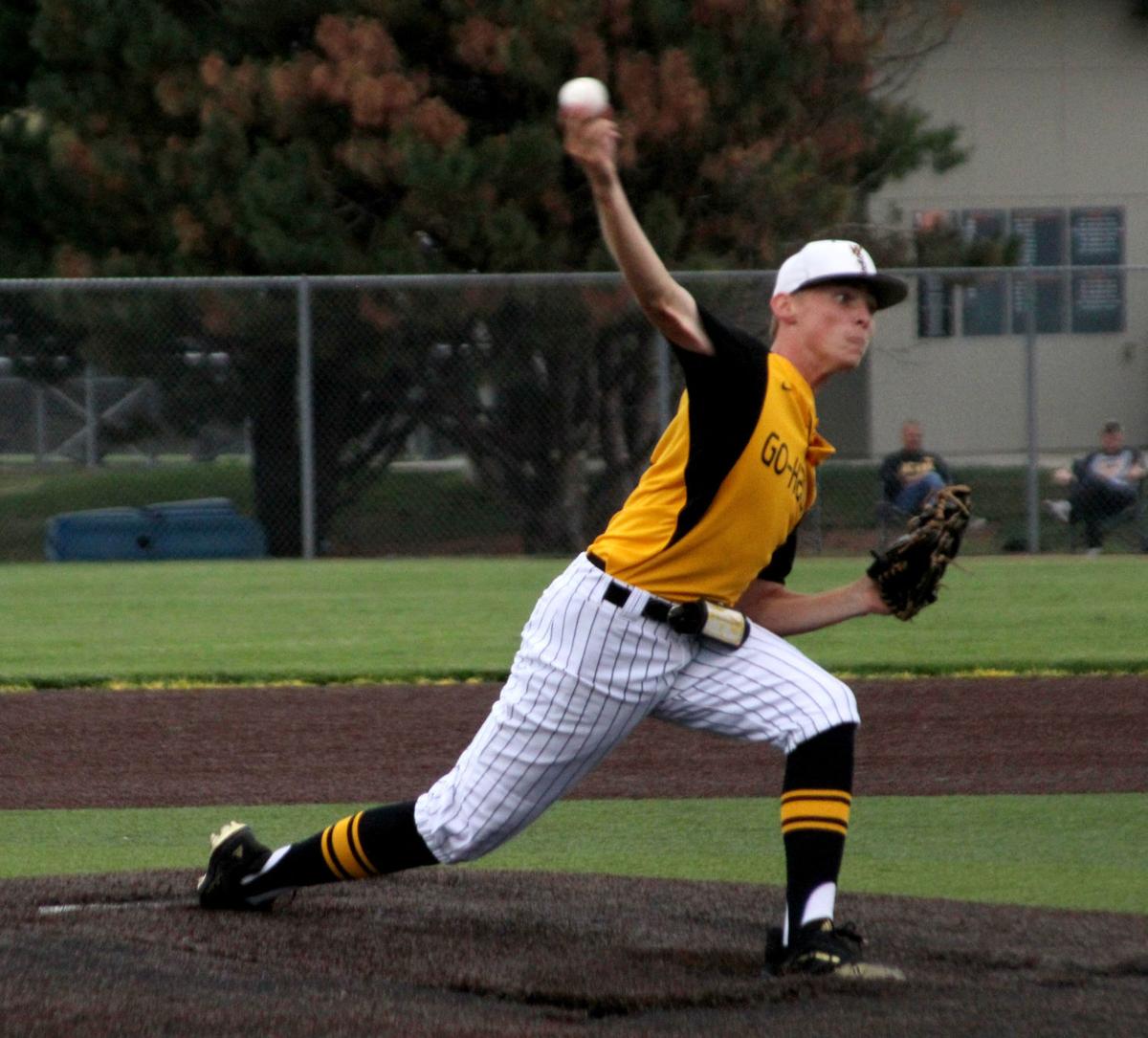 Waverly-Shell Rock junior Carson Graven delivers a pitch during a game against Cedar Falls on Wednesday, July 7, 2021, at Harms Stadium at Hertel Field in Waverly. 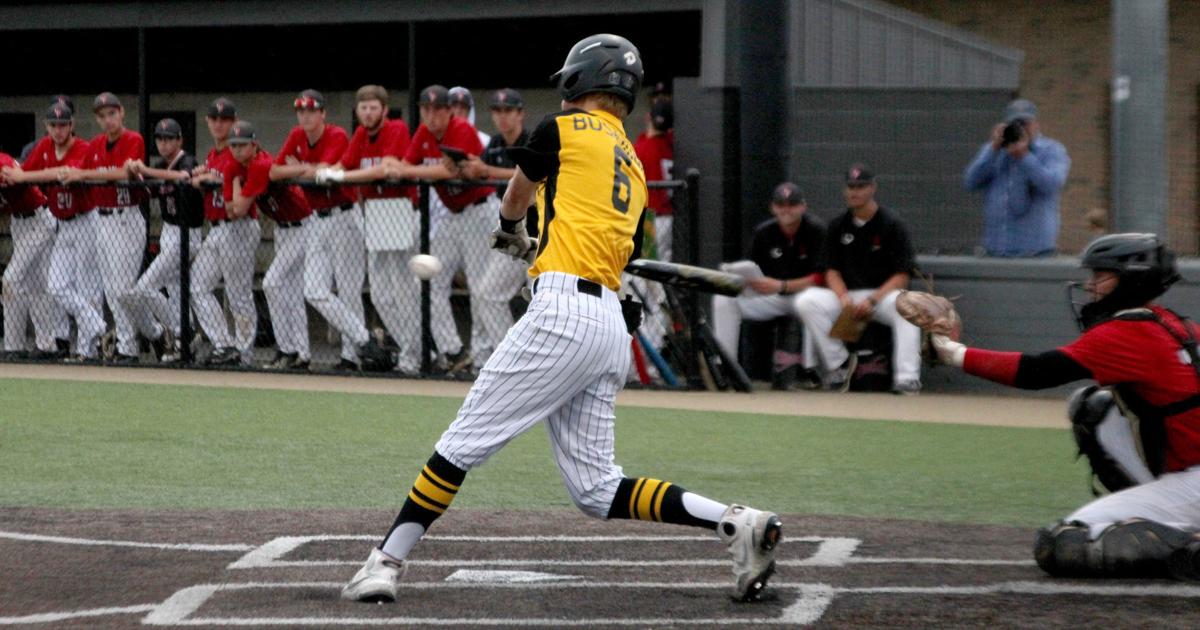 Waverly-Shell Rock senior Ben Buseman swings at a pitch during a game against Cedar Falls on Wednesday, July 7, 2021, at Harms Stadium at Hertel Field. 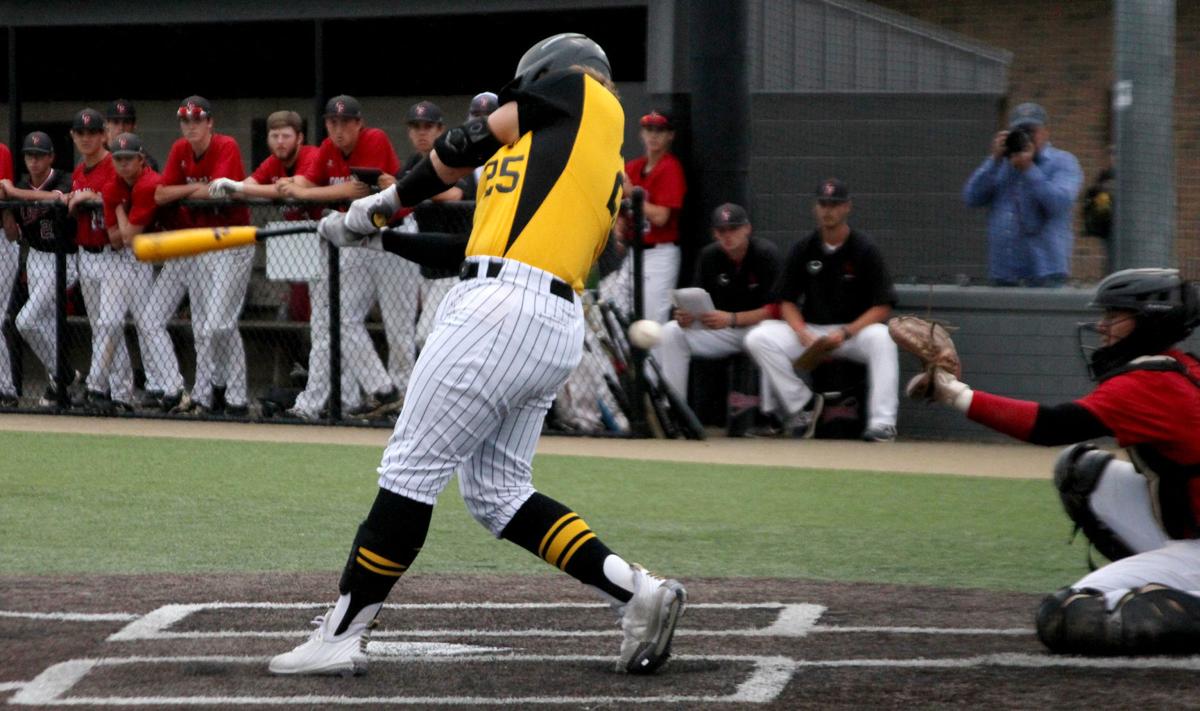 Waverly-Shell Rock junior Chance Key swings at a pitch during a game against Cedar Falls on Wednesday, July 7, 2021, at Harms Stadium at Hertel Field.

Waverly-Shell Rock junior Carson Graven delivers a pitch during a game against Cedar Falls on Wednesday, July 7, 2021, at Harms Stadium at Hertel Field in Waverly.

Waverly-Shell Rock senior Ben Buseman swings at a pitch during a game against Cedar Falls on Wednesday, July 7, 2021, at Harms Stadium at Hertel Field.

Waverly-Shell Rock junior Chance Key swings at a pitch during a game against Cedar Falls on Wednesday, July 7, 2021, at Harms Stadium at Hertel Field.

The local nine were in a bind before they took the field.

Not long after sweeping Tuesday night’s doubleheader at Northeast Iowa Conference rival Oelwein – the final two games between the two schools as members of the same conference – Waverly-Shell Rock’s bus broke down.

The Go-Hawks arrived in Waverly after midnight Wednesday morning. Hours later, they welcomed Class 4A juggernaut Cedar Falls to town for the first time since 2019.

They might have been short on rest, maybe even dreary-eyed, but the Go-Hawks didn’t lack focus. They had plenty of grit and relied on fundamentals – the cornerstones of their success.

Carson Graven wasn’t his sharpest on the mound, his control and command often betraying him. But the W-SR junior “persevered” the best he could, dodging trouble along the way.

W-SR’s greatest weapon this season has been the stolen base. The Go-Hawks entered the contest leading Class 3A in steals, but were anchored by Tigers catcher Gage Flanscha.

Yet the Go-Hawks utilized two extra-base hits, including a triple from junior Korbyn Dewey, executed a handful of bunts and beat out a couple of infield hits. After exhausting what little energy Graven had left in a laborious fifth, seniors Thomas Hart and Ben Buseman closed out a 4-3 win on an overcast and misty night at Harms Stadium at Hertel Field.

“We were the aggressors, and that’s what we wanted to be,” W-SR coach Casey Klunder said. “We know how good they are, so that can be challenging to (deliver) the first punch.”

The Go-Hawks (26-6) delivered said first punch. Dewey provided it in his first at-bat.

As a train whistled by behind the third-base dugout, Dewey smoked the first pitch he saw toward the gap in left-center. He slid head-first into the third, and the Go-Hawks grabbed a 2-0 lead. Senior Andy Roose legged out an infield hit to make it 3-0.

“I heard the whistle go,” Dewey said, smiling. “Coach (Klunder) has been preaching that we need to attack that fastball early and ever since Prange, I think the team’s been doing that pretty well.”

After striking out the side in the top half of the first, Graven limited the damage in the second. Zach Neese came around to score after a leadoff walk, but Graven struck out No. 9 hitter Jaden Kramer and got a ground ball off the bat of Ben Phillips to end the inning.

Graven pitched out of trouble again in the third. A two-out single and walk put a runner in scoring position for the Tigers, but Graven got Neese to fly out to left for the third out.

“I had faith in my teammates and my catcher and our coaches with everything,” said Graven, who earned his fifth win of the season. “I didn’t get all the calls that I usually get, but I never gave up.”

W-SR used its speed to generate a run in the fourth. Roose beat out his second infield hit in as many at-bats and later scored on a botched RBI grounder by sophomore left fielder Dylan Stockdale to push the Go-Hawks’ lead to 4-1.

Those detailed fundamentals Klunder has talked about helped the Go-Hawks generate all the offense they needed.

Graven did his part in the fifth, despite his pitch count rising and the Tigers inching closer to tying the game. Graven opened the frame with a walk to Phillips, who advanced to third on two wild pitches. Graven then traded a run for an out on a grounder before Flanscha tagged a double off the fence in left. Another free pass led to another RBI groundout, and the Tigers cut the Go-Hawks’ lead to 4-3. Graven needed 26 pitches to get out of the fifth – the most he had thrown in any inning Wednesday.

“That could’ve got on top of us, and maybe it would have earlier in the year,” Klunder said. “But he really persevered, showed some toughness in the fifth inning to battle out.”

It was Buseman’s turn in the seventh. He caught Caleb Raisty looking at strike three, then got Flascha to ground to third. Connor Woods drew a two-out walk, and Cedar Falls had the tying run at first. Shover, knowing Woods would try to swipe second, threw to first, initiating a rundown. Dewey eventually tagged Woods out to secure the win and Buseman’s Class 3A-leading eighth save of the season. The ending was fitting, considering it was the same way the two teams ended their game in 2017 – a rundown.

“We’re not a flare program,” Graven said. “We don’t have guys that come out here and throw 95-90. We just always have to do the little things like we did (Wednesday).”

True. The Go-Hawks won’t overpower opponents with heat, nor will they rely on the home run to win games. They will, however, attack teams through calculated risk – smart base running, timely hits and, most important, executing the fine details of the game.

“We’re pretty young,” Dewey said. “This year we’ve got a lot of speed, so I think if we put the ball in play, we have a pretty good chance of getting on base. Sometimes, in these good games, we’ve got to get the bases we can.”

Ben Buseman drove in three runs to help lift Waverly-Shell Rock to a 6-4 win over Waterloo West on Thursday at Harms Stadium at Hertel Field.

The W-SR senior went 3 for 3 with three singles.

W-SR led 4-0 after two innings. Waterloo West evened the game, 4-4, entering the fifth before W-SR tacked on two more runs and held on.

Junior Chance Key (5-1) picked up the win on the mound. He yielded four runs (three earned) off five hits, struck out four and walked three over five innings.

Waverly-Shell Rock pounded out 13 hits during a 10-6 win at Clear Lake on Friday.

Junior Jacob Lord (1-0) picked up his first win of the season after working two innings. He allowed no runs off no hits and struck out three. Sophomore Abram Wrage and senior Thomas Hart also pitched.

W-SR (28-6) traveled to Independence on Monday.

Partly cloudy this evening, then becoming cloudy after midnight. A few flurries or snow showers possible. Low 9F. Winds SE at 5 to 10 mph.

Overcast. A few flurries or snow showers possible. High near 30F. Winds SSE at 10 to 20 mph.