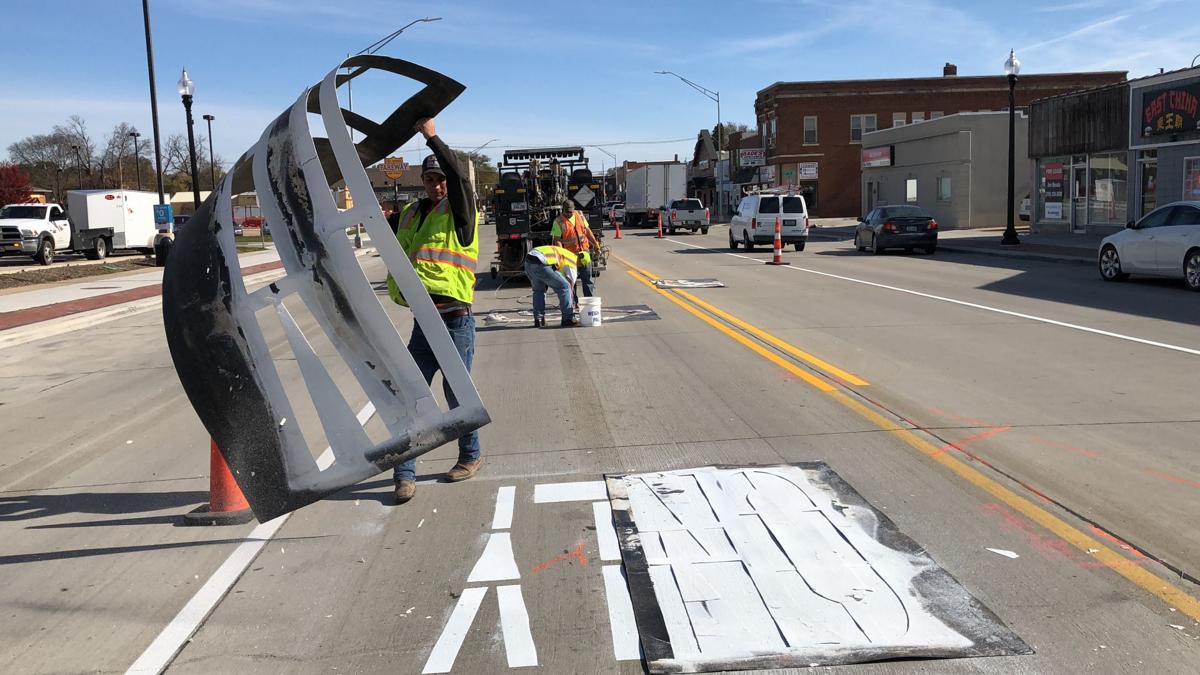 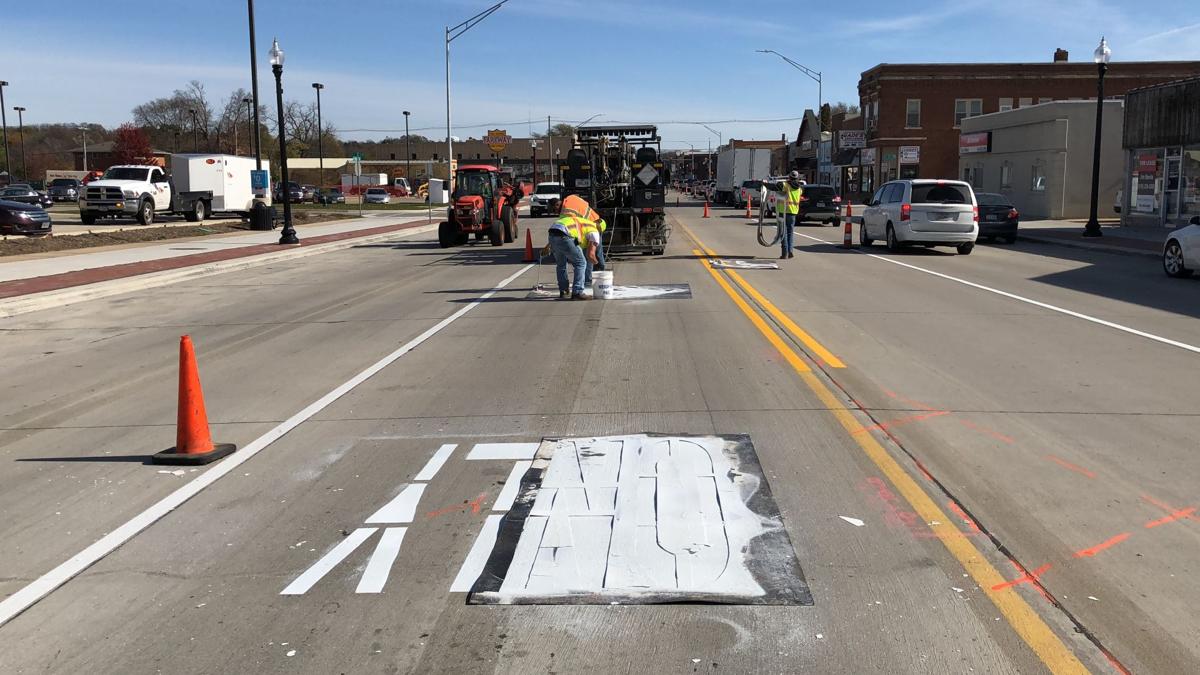 Just days before the expected reopening of Bremer Avenue after two years of construction, the Waverly City Council reviewed some of the plans for the proposed streetscape project that may begin next year.

Werger talked about the desire by those involved in the project to have specialized trees planted within the 4-foot-wide brick strips near the street. He said that most of them would be located near the intersections, where there are now bump-outs that would help slow traffic and shorten pedestrian crossing time.

In the presentation, Kurtz suggested a 4-by-4-by-12-foot soil container under a 4-inch caliper and 14-foot canopy diameter.

“They want to make sure there’s enough space for the trees,” Werger said. “Underneath the bricks, they can make that work.

“The closer you get to the intersection, though, the brick strip doesn’t go as far as what they expected it to go, as far as going into the bump-out, because it stopped before you got to the bump-out for a lot of reasons, including the streetlight fixtures and everything else that was in that intersection.”

Ward 4 Councilman Mike Sherer asked why the committees thought it would work better for the trees to be under the bricks than under concrete. Werger said the bricks are permeable, which would allow water to seep through to the roots.

Sherer also wondered about the root structure, if a tree would survive in the type of bed that is being proposed. Werger, as he consulted with Leisure Services Director Tab Ray, said that tree roots usually grow outward more than downward.

“It’s really providing enough soil on each side of that tree in order for it to survive,” Werger said. “They really wanted us to optimize that.”

AHTS also suggested surrounding each tree with guards to hold them up, provide wind protection and also prevent being hit by vehicles. They can also double as bike racks, as cyclists can lock their bicycles to the guards.

Werger said the idea of having three types of trees downtown would be if one species was lost, there would be two others that could survive. Also, it would break up uniformity.

AHTS suggested 20 trees be planted at a total cost, including guards, soil and labor, of $84,000.

The streetscape committee is also planning on including several planters of different types scattered in the area between the Fourth streets on each side of the river. There could be up to nine double-bench planters, which pedestrians could sit on, for a total of $25,200, and 16 round, large planters for a total of $33,600.

Werger reported that a preliminary budget for the streetscape improvements suggested would be approximately $238,680. In a memo to the council that accompanied the agenda for the study session, about $300,000 to $400,000 could be factored into the Fiscal Year 2019 budget using money from either the general fund or Tax Increment Financing.

During construction, work crews removed 43 truckloads of paving bricks that were underneath Bremer Avenue. Werger said the person who bought those pavers could make those bricks available for future projects.

Additionally, the groups overseeing the streetscape project are suggesting that merchants along Bremer Avenue spruce up the 4 feet of space in front of their storefronts with vignettes. Werger said they could be creative.

“Whatever it is that would accentuate whatever is in their store there,” he said. “It’s helping people be more creative about using that 4-foot strip that’s near the building.”

He said that area in front of the storefronts were somewhat slanted and not optimal for walking, so Economic Development and the Chamber hoped owners would decorate that area.

“It’s pretty creative and unusual,” he said. “When you go to some communities, you’re not going to have that individualistic of a presentation.”

Werger said his department and the chamber were looking at ways to encourage more of those types of creative expressions.

He added with the 4 feet in front of each storefront and the 4-foot brick strip near the curbs, it leaves 8 feet for pedestrian traffic that is compliant with the Americans with Disabilities Act.

“These are the things the streetscape committee would like to do, would like to move forward with, and this is one of those things that we think that the city can provide some assistance,” Werger said.

However, as this process is moving forward, there is still concerns over the decision in August to reduce the number of lanes along Bremer Avenue from four to three. During the public comment period at the beginning of the meeting, three residents stepped forward to express their disappointment.

Michelle and Miguel Chavez each spoke separately about their concerns. They have been living in Waverly for four years, along Brown Lane off of Cedar Lane, and work in Waterloo.

Michelle said they each have to go through downtown to go to and from work. They recognize that construction had hampered their travels the last few years.

“Now that the construction on Bremer Avenue is coming to a close, we’ve been quite dismayed to see that the city is now implementing this ‘road diet,’” Michelle said. “Before we lived up here, I worked down in Des Moines, and used to go up and down Ingersoll Avenue. It went from a four-lane road through there down to a road diet with three lanes.

“They didn’t have any construction going on, but once they implemented that road diet, not only did the traffic flow get worse, they had several businesses that shut down.”

Miguel Chavez said he sees more people getting frustrated with the traffic patterns once the road diet is fully implemented along Bremer Avenue.

“There are people who will go out there and just park in the middle of the intersection until they get their opportunity to squeeze in,” Miguel said. “I do not see that getting easier when we have the traffic flowing.”

Myron Peterson, who lives on Birch Avenue, which is of East Bremer Avenue near the city limits, asked questions about the configuration. He wondered if the 5-foot buffers between the traveled lanes and the parking lanes designated for bikes. Mayor Dean Soash said it wasn’t.

“That would be a total disaster with the wide equipment and the combines and the tractors and stuff that come through here, that would be an instant death,” Peterson said.

He also wondered if anyone on the council dais saw the traffic backed up approximately nine blocks long as the pavement markings were being done, as well as the patterns during the last eight to 10 weeks between 4 and 5 p.m. Soash said he traveled the area several times during the day.

“It’s totally ridiculous that we have cars backed up for eight, nine blocks,” Peterson said. “I know for a fact… San Francisco, when they didn’t have enough roads for four lanes, they sure as heck didn’t go back to three. They went to 12.”

“About the only answer I can give is, ‘Give us a chance,’” Soash said. “It may work, and it may not. One group may be able to stand back someday and say, ‘I told you so.’”

Drenkow added there will be a period of adjustment once the DOT opens the road, which was announced on Tuesday it would be on Wednesday.

“It’s not once all the barriers get down and everything will be a normal situation,” Drenkow said. “There’s going to be a period of a number of weeks if not months where people are going to be adjusting their traffic patterns. The city will be adjusting the timing of the lights. You’ll be looking at how things actually operate.

“I hope that people — both those who support it and those who opposed the road diet — will be patient, do their best to make it work. And if it doesn’t work, we’ll certainly revisit it.”

Partly cloudy this evening, then becoming cloudy after midnight. Low -1F. Winds SSE at 5 to 10 mph.